I’m driving just outside the town of Tarragona on a two lane road. I see a car in my side view mirror overtaking everyone. Slight problem is that there is oncoming traffic and the driver of the overtaking car has nowhere to go.

He zips in behind the car which is right behind me, bangs into that car which in turn bangs into me. Seat belt intact, my head moves forward and then slams backwards hitting the hard edge of the plastic upholstery on the head rest.

The driver who caused the accident and I are on the street next to the cars and are in the process of exchanging information, when out of the blue, an awful deep, deep pain in the back of my head radiates. It feels as if there’s a weight on top of me pushing my head towards the ground and as if knives are inside my head cutting their way through my brain.

I don’t know what to do.The sharp pain lessens, but the heavy feeling presses down on the back of my head. I have to be somewhere right away and it’s impossible to contact anyone to let them know what has happened.  In a confused stupor, I leave the scene. Yes. I get back in my car and continue driving to Tarragona.

“Take a seat,” the person I’m to meet smiles at me, indicating a chair which seems to me is on the other side of the room.

Now, here’s a weird thing. I can see the chair, but I can’t figure out how to go to it. Time to leave, get home and review my options. Something is not right, obviously.

“You should go to a doctor. Maybe even the hospital.” I nod in response, at least that’s what I think I do.

I manage to take my exit for Vilafortuny off the main highway. That’s good. But then I have to stop for I don’t know whether to turn left or right. After a few minutes I think I know that I should go left.

The whole time, my head feels as if someone is pushing it down. I’m confused, but no longer in severe pain. Well, there is a deep ache, but the sharp radiating pain has subsided quite a bit. I should probably see a doctor, but I don’t know who as I’ve never been ill. I decide I’ll see how I feel tomorrow.

Next day, I’m disoriented and still feel a deep ache at the back of my head. In the end, my husband drives me to a hospital in Tarragona where I relate to the people there my tale of woe.

A nurse tells me to remove my shoes and lie down. A doctor shines a light in my eyes and tells me to follow the light. He stares into my eyes and sighs heavily, all the time frowning.

What’s wrong with my eyes?!

They both leave. I get up, put my shoes back on, ready to  leave too, but someone else comes into the room.

“You need to be admitted to hospital,  Remove your shoes and lie down. You’re not going anywhere.” It’s the nurse again. She takes my shoes off and places them on the floor and leaves.

Now totally scared, I’m panicking and about to flee. Where are my shoes?!  I feel helpless and I have this urgent need to put them on. I sit up again, place my feet on the floor and try to feel for my shoes. The door opens and another doctor enters the room.

“Señora, I’m Dr. Esteve, a neurologist. We need to remove some fluid from the spinal column.” He sounds very calm and reassuring.

Yikes again!  I don’t like the sound of that one bit.

“Yes, one pupil is more dilated than the other.” He informs me all the while shining a light in my eyes.

Would you kindly stop frightening me??

“Why? Why don’t you want to be admitted?”

“Señora, if I were you I’d be more afraid of leaving. You may not make it home.”

“What?!” I don’t understand what’s going on.

I do not believe that any of this is happening, and it’s impossible to think straight. My immediate reaction is simply to flee.

Where are my shoes? I sit up again and mumble,  “I need to take care of my son.”

“Your brain is swollen. We need to do further tests.”  He puts his hand on my shoulder and  offers me a couple of pills.

Now, I hate to cause a scene, but I was always told that you should know exactly what you’re being given by doctors. Don’t they make mistakes just as we all do?

“Señora, take them. I’m trying to help you.We’ll have you admitted shortly.” Dr. Esteve speaks slowly, presumably so that I can understand him better. He has a kind voice and looks at me with concern. “So, you really don’t want to be admitted to our hospital?” He folds his arms and stares at me with a puzzled look.

He lifts a telephone and starts speaking to someone. I think he’s talking about me, for he keeps looking over in my direction. Finally he puts the phone down and comes over to me.

“If you go to Barcelona, to the Clinica Quiron, you can have a scan of your brain. We can’t transport you so you’ll have to make your own arrangements.”

“We don’t have a scanning machine. The Clinica Quiron in Barcelona is excellent and they have all the latest technology. If the results of the scan are good then you won’t have to be admitted. Come back here afterwards so that we can discuss your results.”

“I will. I will. Thank you. Where are my shoes? I keep losing them.”

“One word of caution. If the results are not good then you will be admitted to the Clinica Quiron immediately. ”

It’s a deal. My husband drives me to Barcelona. On the way we stop off at a restaurant. I’m not hungry, but I eat raw garlic. The bitter, pungent taste makes me feel alive, in touch with what’s going on around me, reminding me of the same way I was before the accident.

We arrive at the Clinica Quiron in Barcelona. Gosh, what a fancy place. It’s like a five star luxury hotel complete with beautiful tiled floors.  I’m astonished at how elegant and immaculately clean it is.

“If it turns out my brain is indeed bleeding and I’m dying…” I really sound delirious as I try to come up with my dying wishes.

My husband is beside himself and just stares at me. Much as I ramble on at times, he’s probably never ever seen me this way before. I think my head is hanging heavily as if the pain is pushing it down, pushing my head painfully. I wonder what the difference is between pain and an ache? I wonder why one pupil is more dilated than the other? What does it mean?

I’m wheeled into a room inside of which there is a huge machine. Oh? I’m going to be going inside this machine? Really? I guess this is the scan. Someone wraps something tight around my head making it hurt a little. I lie down and slide right inside the machine. If I weren’t so confused and worried about my brain I’d more than likely be feeling as if I were being gobbled up.  It’s like being in a submarine, not that I’ve ever been in one, but you get the idea. There are whirling sounds going around and around. I just hope the machine doesn’t collapse on me, and I hope I remember how to breathe. I hope I’m not left inside here, never to see the light of day again and I hope too,  that if my brain is indeed bleeding that I don’t die. Not right now. At least this Clinica Quiron seems a really fine place, so if I have to be admitted, then…

Out I come. The scan is over.

Shortly afterwards I’m handed the results. Guess what?! My brain is not bleeding!  In fact, it’s quite normal. I’ve never had my head examined before, so it is reassuring to have it in black and white that I’m perfectly normal.

I’m told that I can leave, but that  I have to stay in a darkened room for at least one week, and I have to do nothing but rest. I’m told to go back to the neurologist in Tarragona who’ll give me a prescription to bring down the swelling of the brain.

I’m still confused but I do know that I feel great relief that I’m not about to kick the bucket after all.  Maybe all that garlic I ate helped. I’m sure it kept away evil spirits, if nothing else.

I don’t know how I’ll be able to remain in a darkened room for days on end, but I’ll figure it out. The main thing is that I know, thanks to the scan, that I’m not  bleeding internally.

I’m so glad that I let it be known that I didn’t want to be admitted to the Tarragona hospital, and that Dr. Esteve offered me the possibility to go to Barcelona, to Clinica Quiron  for a CAT scan. But, isn’t it a shame that this scan isn’t available in Tarragona? People have to be admitted to hospital, undergo invasive tests which could possibly lead to infections and complications. In the meantime they and their families would be in anguish, just the way I was. 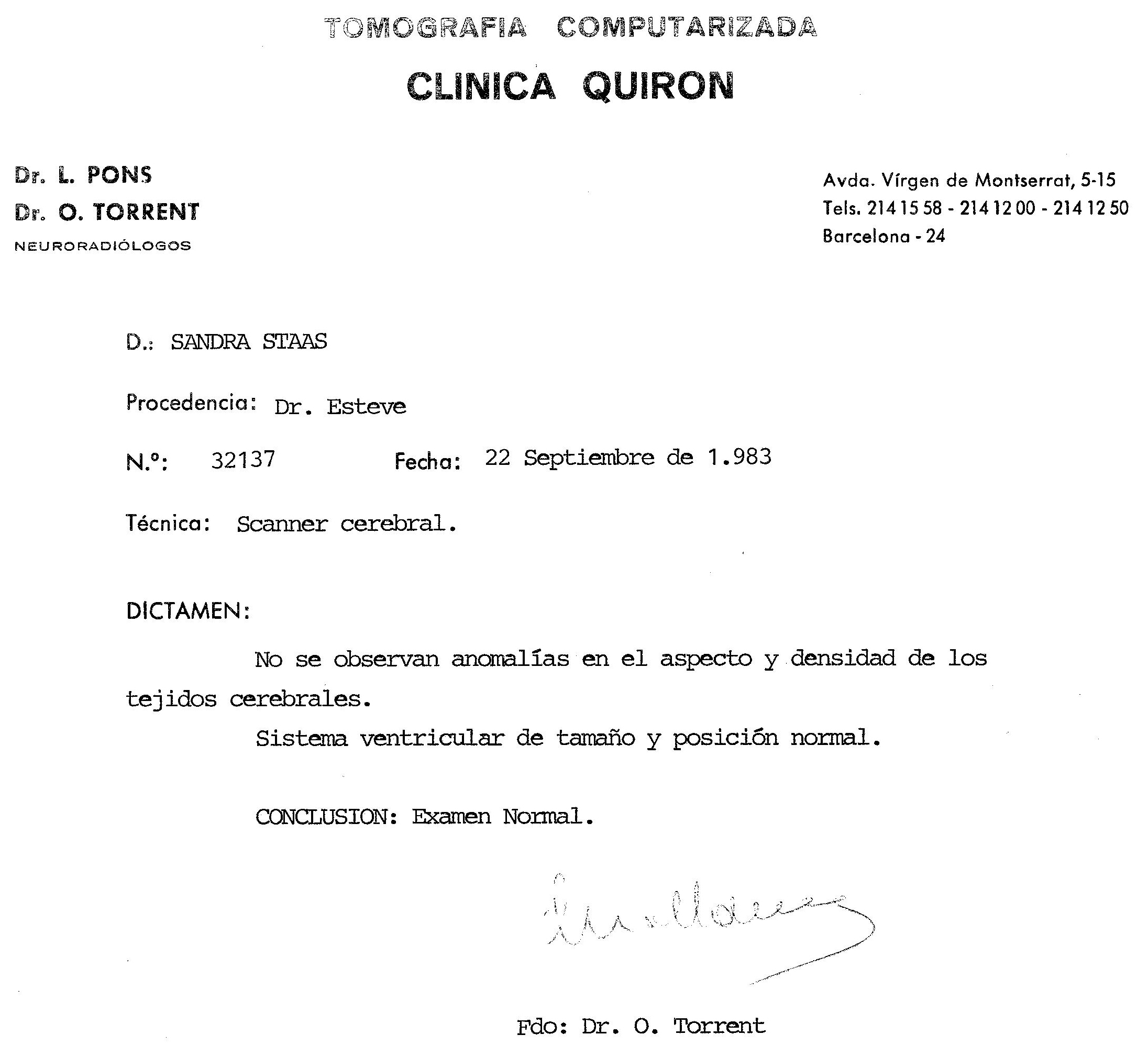