Ribadavia – Strolling through the passageways of time

Without doubt, Ribadavia is a sparkling jewel in Galicia’s historic crown. In 1063 King Garcia chose Ribadavia as the capital of the kingdom of Galicia. That particular honour has long since passed to another. Today, however; the town holds a new title: capital of the Ribeiro wine growing region. 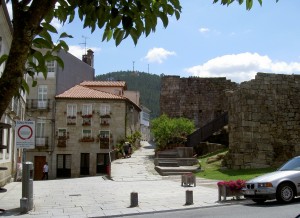 In the shadow of the castle

We entered the town from the direction of Ourense, travelling along the Autovia das Rias Baixas (A52). Having left the highway we made our way along minor roads into the heart of the town. Before long, the ruins of the castle of the Counts of Ribadavia came into view; directly opposite is a car park.

We found our bearings and headed straight for the Praza Maior (Plaza Mayor), in search of the tourist information office. A narrow street, barely wide enough for traffic, turns left; then right before opening out into the main square. 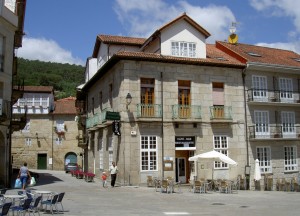 Entrance to the Praza Maior

The tourist information office is housed in a 17th century pazo (manor house) in the north eastern corner of the square. This baroque pazo was home to the Sarmiento family, Counts of Ribadavia. An honour bestowed on them by the monarchy in 1476 in recognition of their support during the Reconquista; in particular during the siege of the last Moorish stronghold, Granada.

Directly opposite the tourist office stands the 16th century town hall and bell tower. The town hall has a 19th century façade but the original bell tower, built between 1545 and 1555, stands to this day. What I found particularly interesting was the accuracy of the 300 year old sundial situated just below the modern clock. 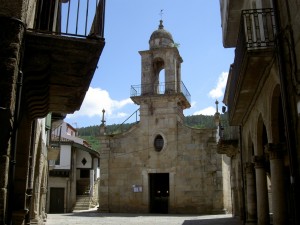 The church of St. Mary Magdalene

Grasping our newly acquired tourist map, we began our self-guided tour. One of the advantages of exploring Ribadavia is its size. With the exception of the church and convent of St. Francis, all its historic landmarks are within a stones throw of each other.

Within two minutes we were approaching the tiny square of Plaza de la Magdalena and the church of St. Mary Magdalene (Iglesia de Santa Mª Magdalena). Our route took us along narrow streets lined either side with medieval porticos. 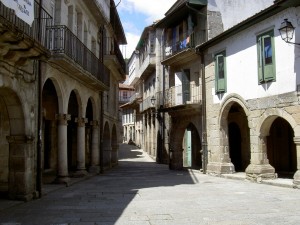 From here we strolled along Porta Nova de Abaixo, part of the old Jewish quarter. It’s believed that Jews settled in the area in the 11th century and specialised in the wine trade. This charming lane leads to Porta Nova, one of the three remaining 12th century castle gates. 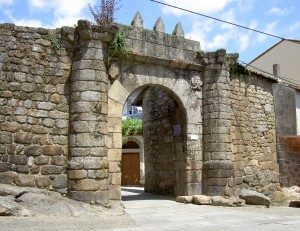 By now we’d built up quite an appetite. We headed back to Plaza Maior and the Restaurante Vinoteca Ribadavia (Praza Maior 10, Ribadavia, +34 905551721). Their menu of the day (menu del dia) is a three course lunch with a bottle of wine, water, and coffee for a fixed price of ten euros per head – outstanding value. The wine, Castro Rei, was crisp, light, and fresh: typical of the wonderful Ribeiro white wines produced in the area. 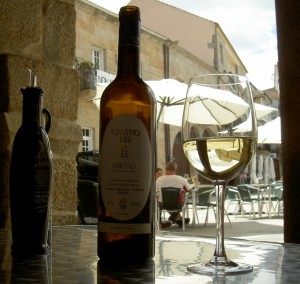 After lunch our exploration continued. I was particularly keen to see the House of the Inquisition. En route we passed the 12th century church of St. James (Iglesia de Santiago). Built in the Romanesque design, it features an impressive 24 paned rose window.

From here we strolled to the viewing point overlooking the river Avia. On the far bank sits the 17th century church and convent of St. Francis (San Francisco). Also visible from here is the Eiffel-style, iron railway bridge connecting Vigo at the coast with the inland city of Ourense. 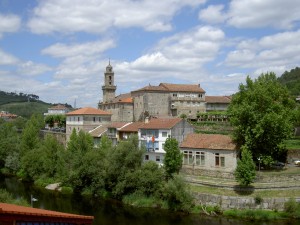 The church of San Francisco

Next stop on our tour was the 16th century House of the Inquisition. Lord only knows what went on behind these closed doors. This house was the office of the Holy See charged with overseeing the execution of catholic doctrine. 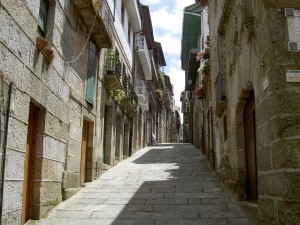 On the right, the House of the Inquisition

More narrow streets and medieval porticos took us to the 12th century church of St. John (Iglesia de San Juan). The church belonged to the Order of the Knights of St. John. In 1213 the order established a hostel in the town, providing medical and military aid to pilgrims travelling the Camino de Portuguese from Braga in Portugal to the tomb of St. James in Santiago de Compostela. 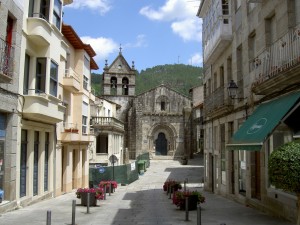 The church of St. John

By now we’d come full circle. Just outside the historic centre is the 17th century church of our Lady of the Portal (Iglesia de Ntra. Señora del Portal) and the 13th and 14th century church and convent of St. Dominic (Sto. Domingo). The latter represents one of the best examples of Gothic architecture in the area. 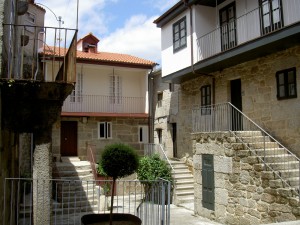 One location not in the tourist guide but in my opinion well worth a visit is the town cemetery located opposite the church of St. Dominic. The high walls and gated entrance are quite imposing but once inside the spectacular forested scenery of the Miño valley seems to merge harmoniously with the tombs and headstones of the town’s dear departed. 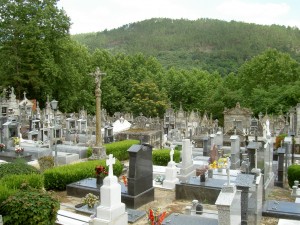 A place of eternal rest

Any visit to Galicia would not be complete without taking a stroll around this enchanting and historic town. I for one can’t wait to return.

Follow this link to watch a short video of Ribadavia – Strolling through the passageways of time. 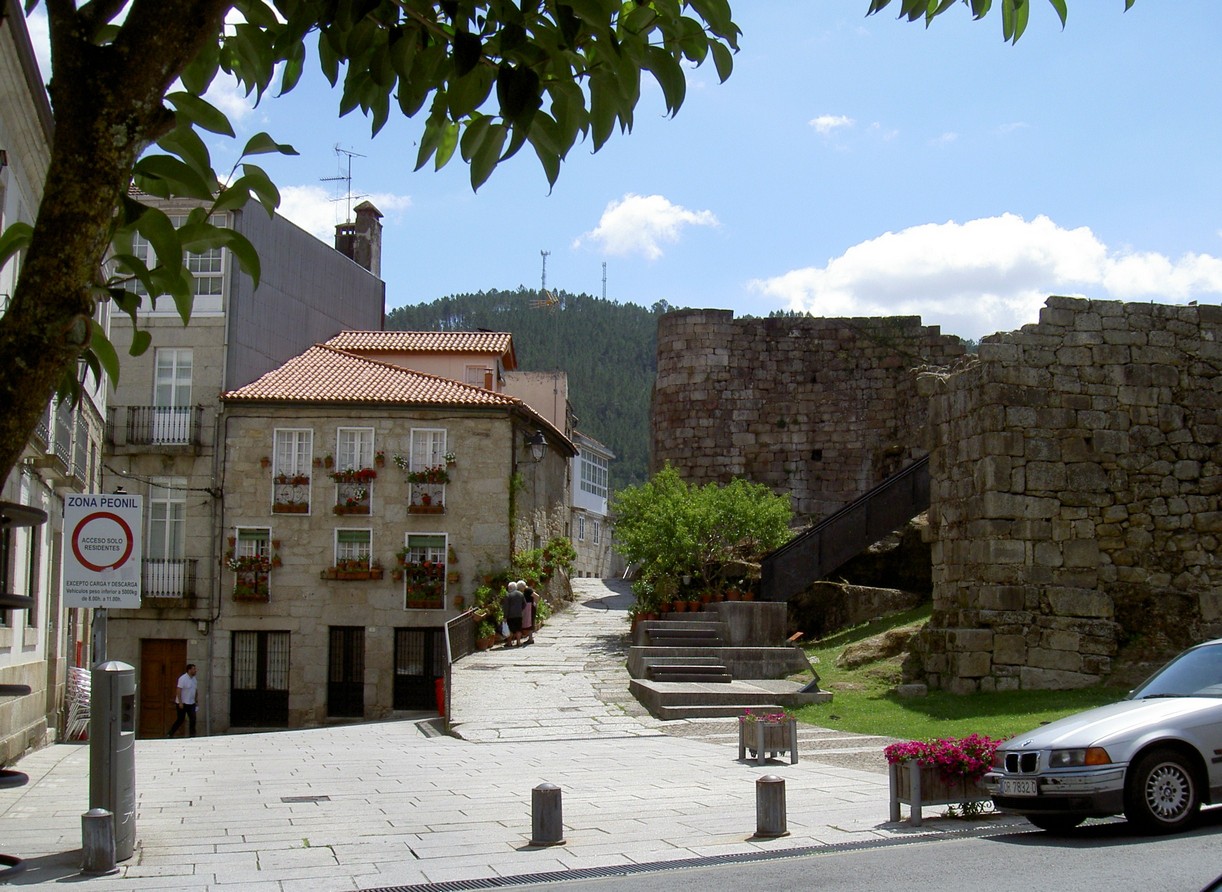 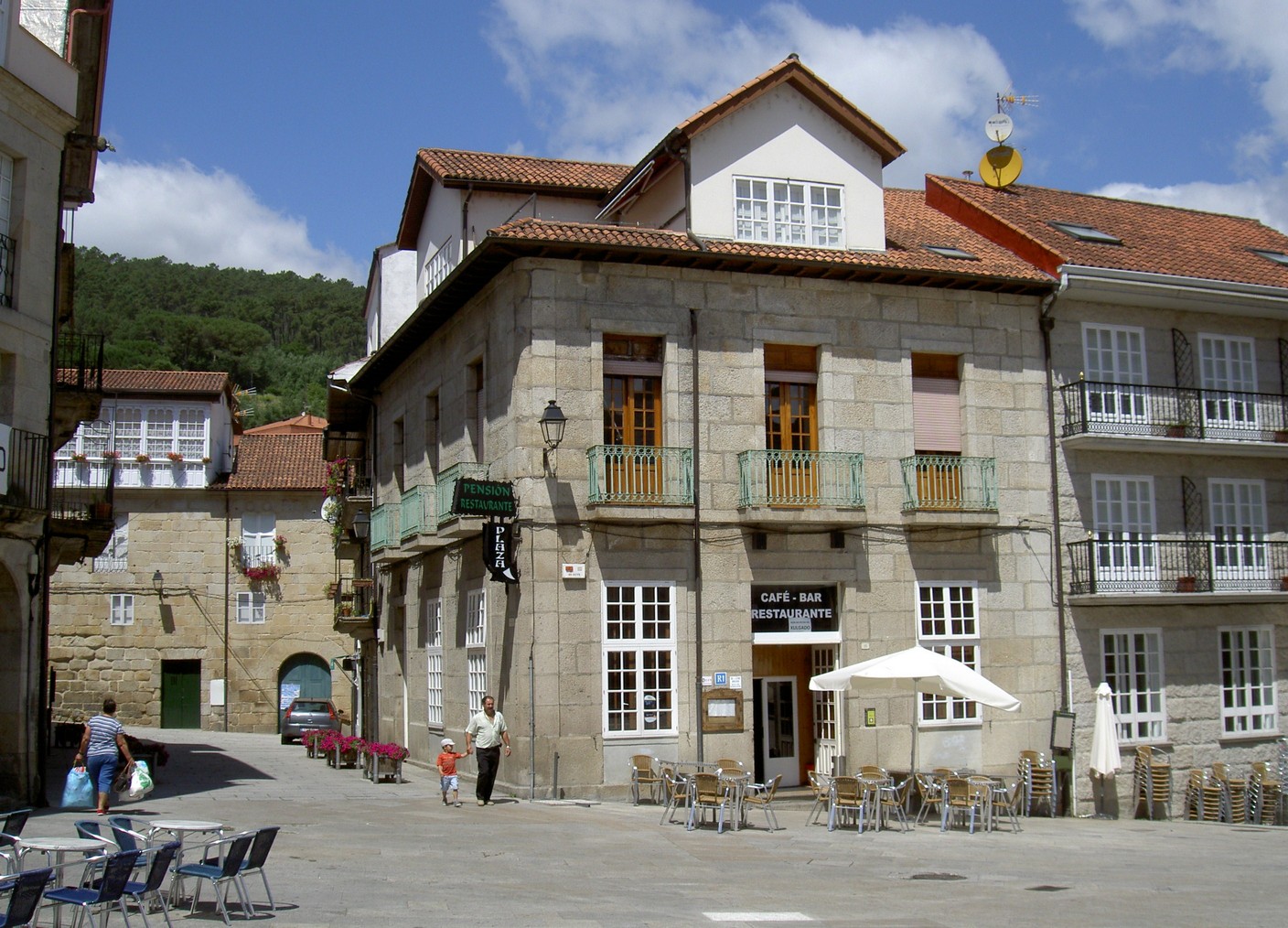 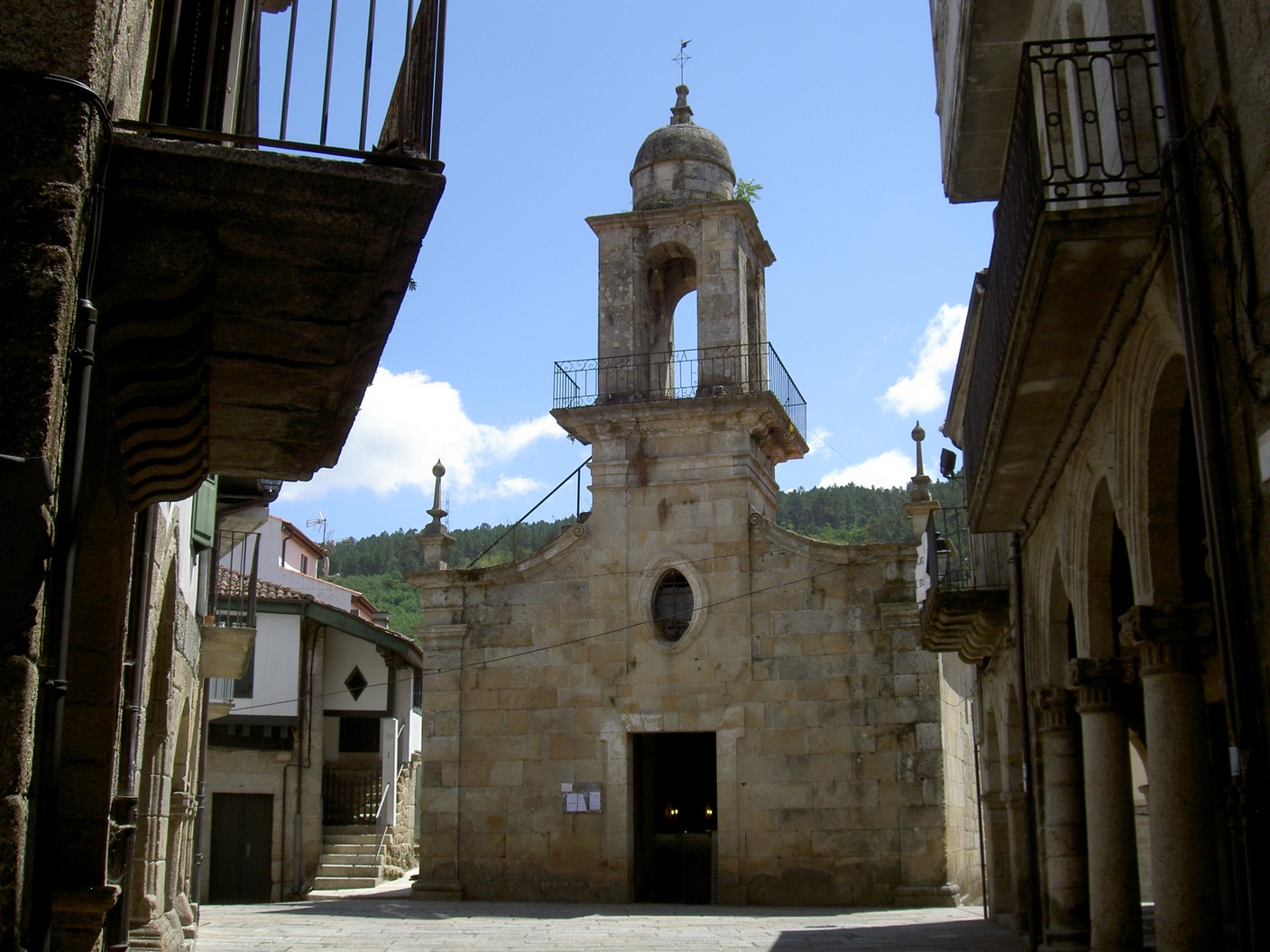 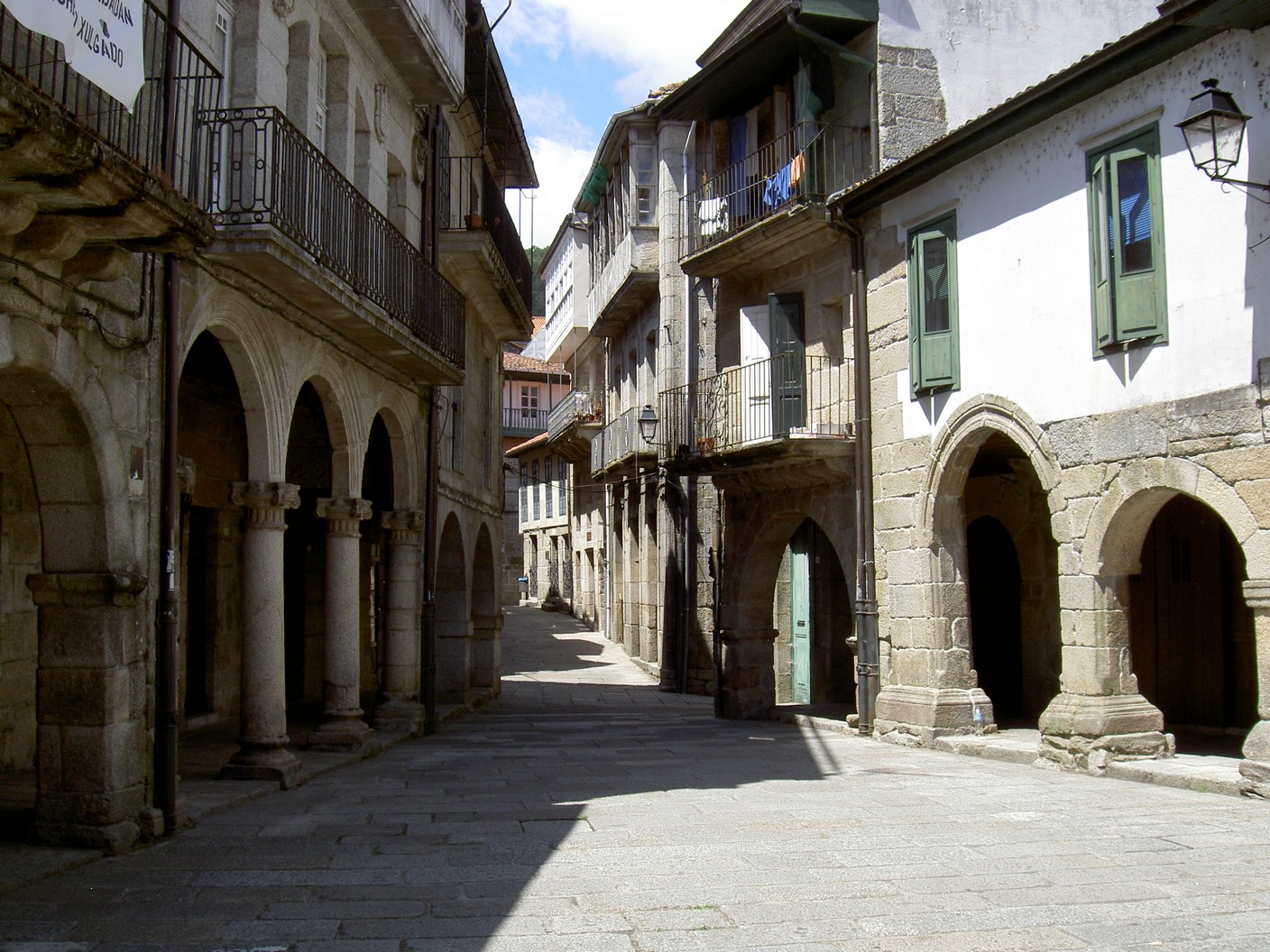 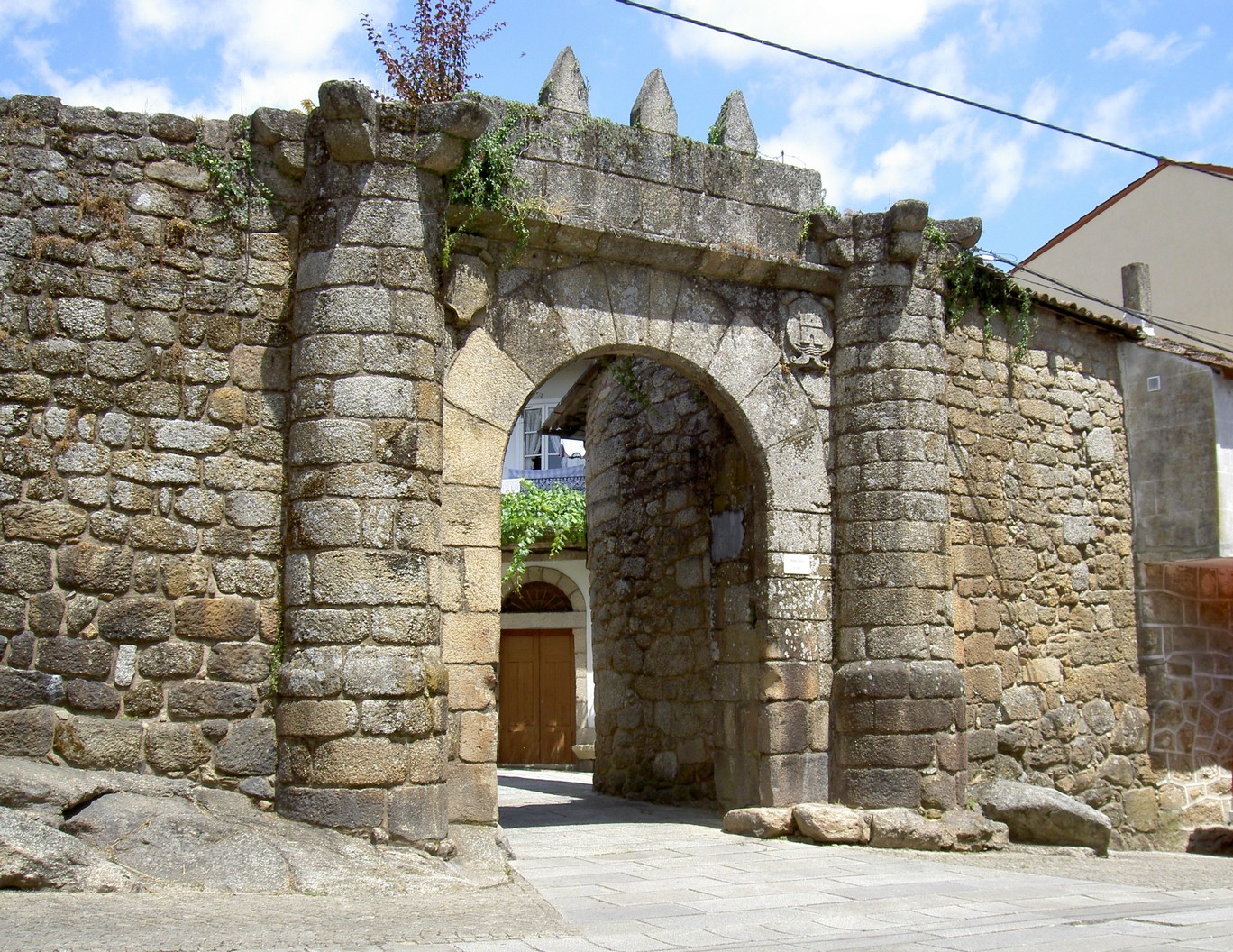 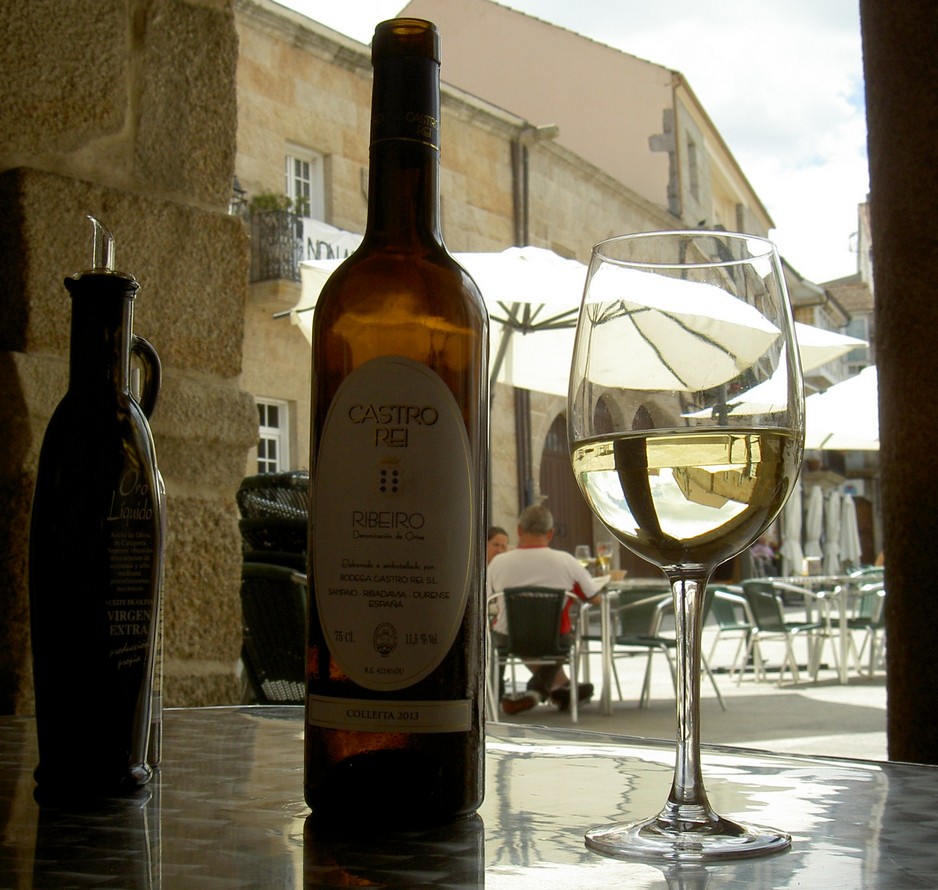 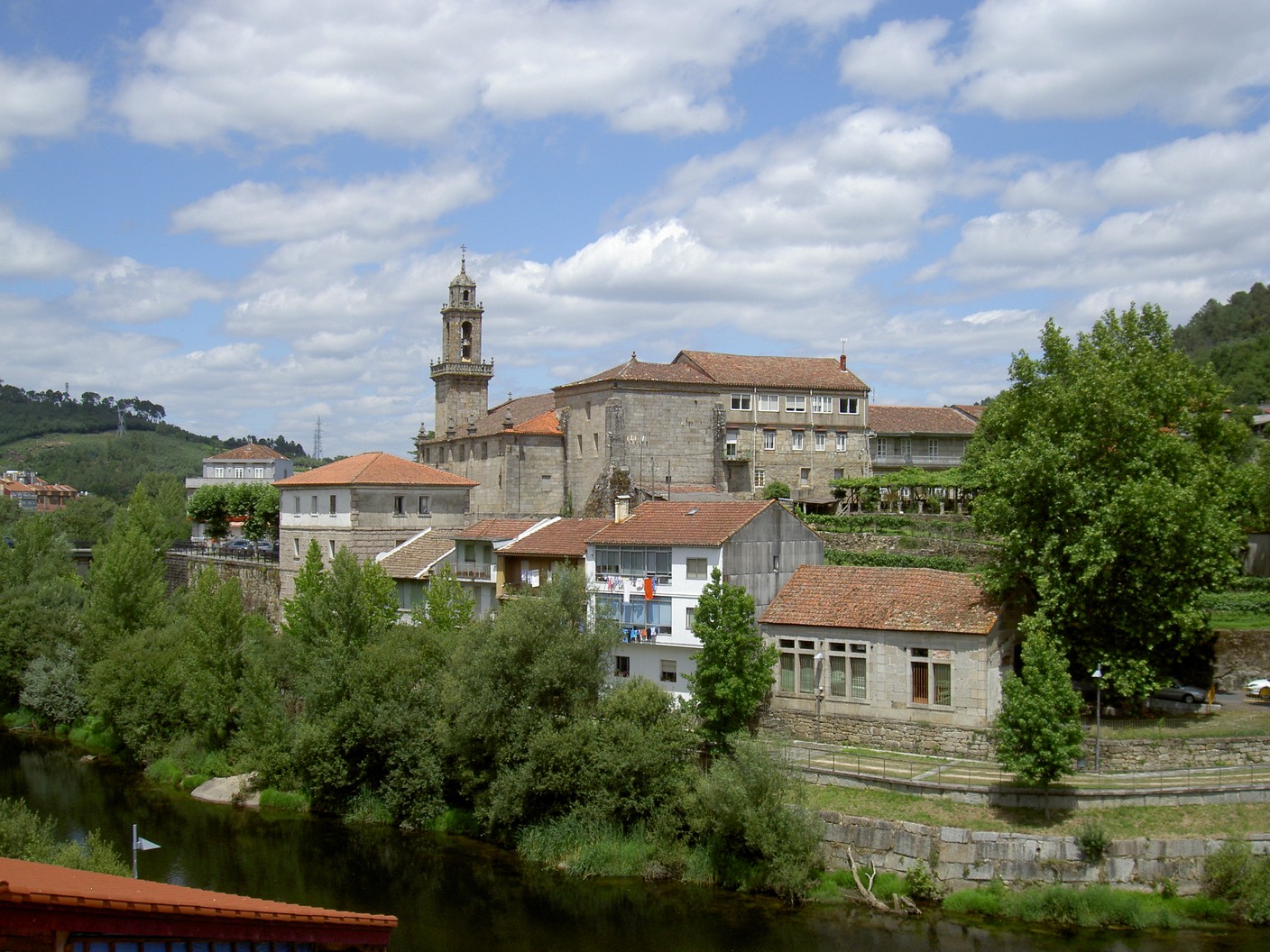 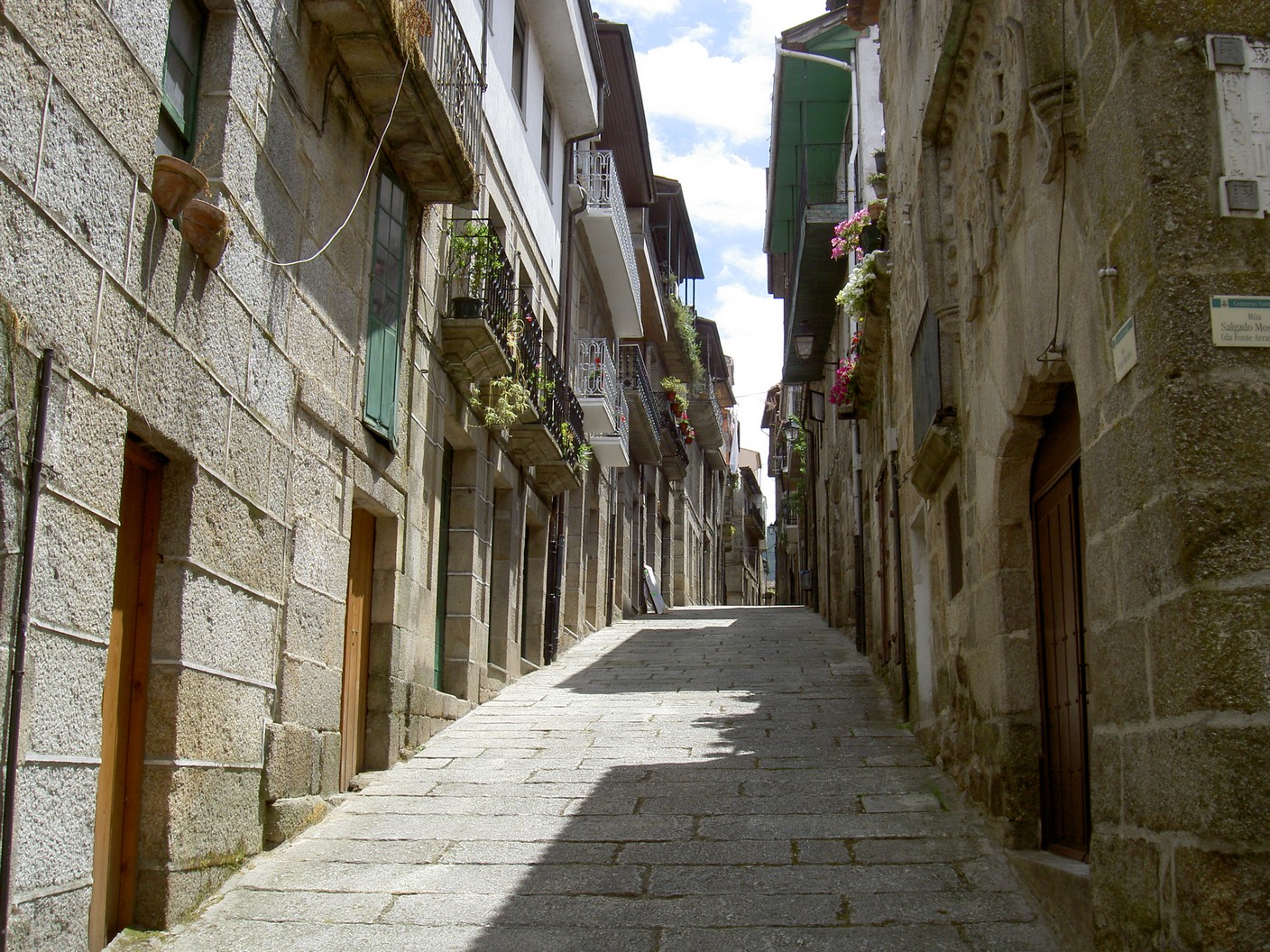 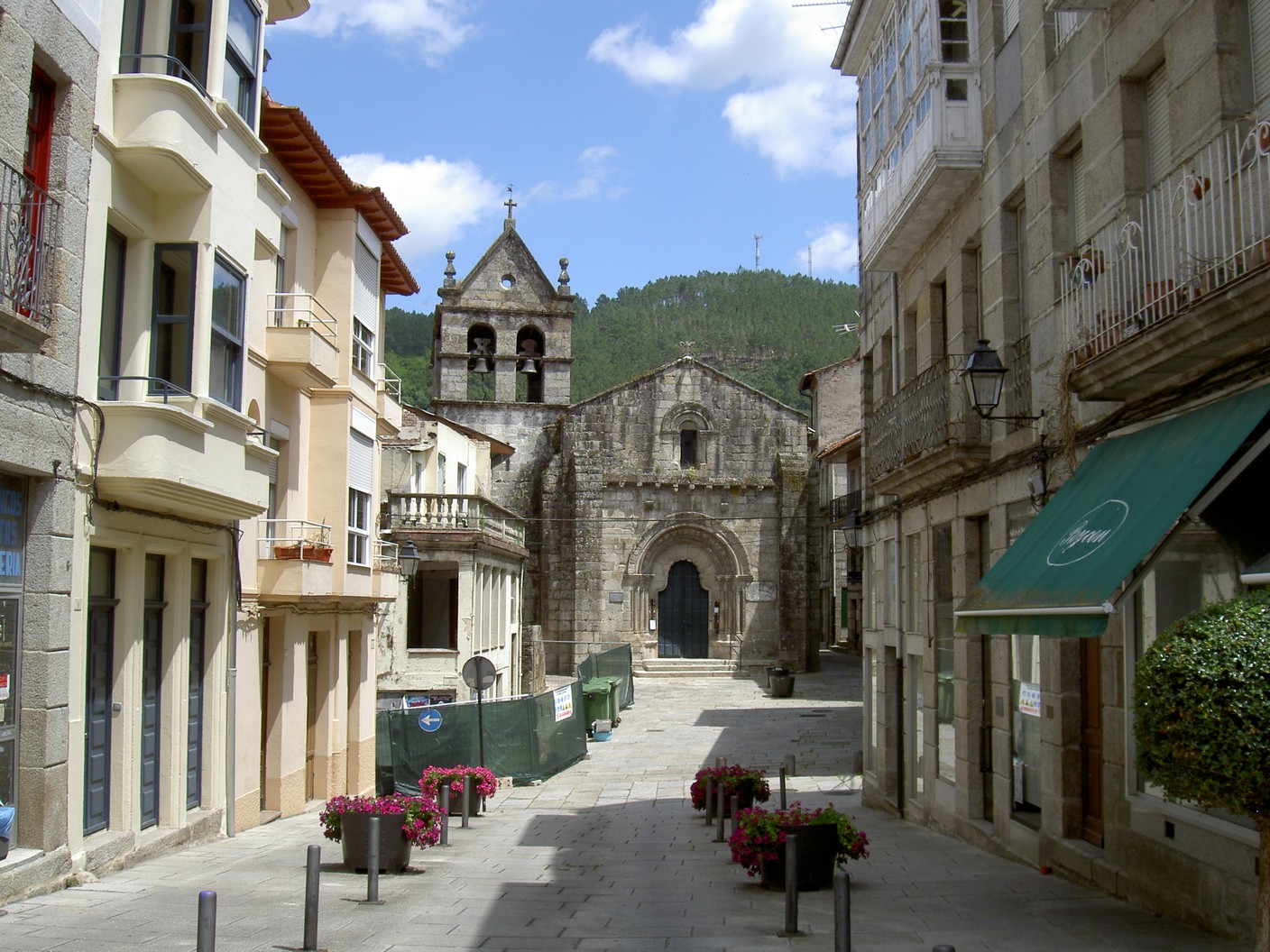 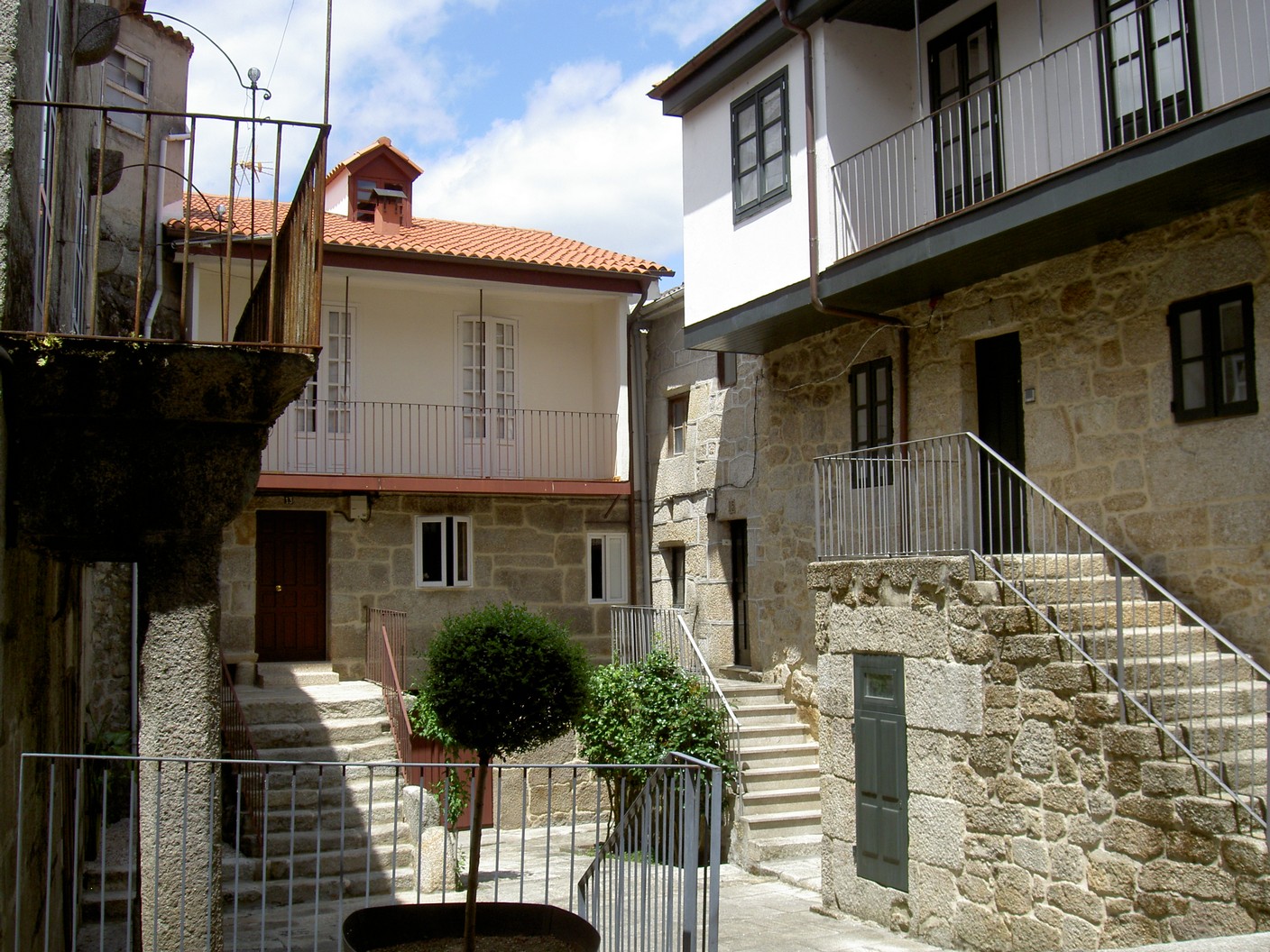 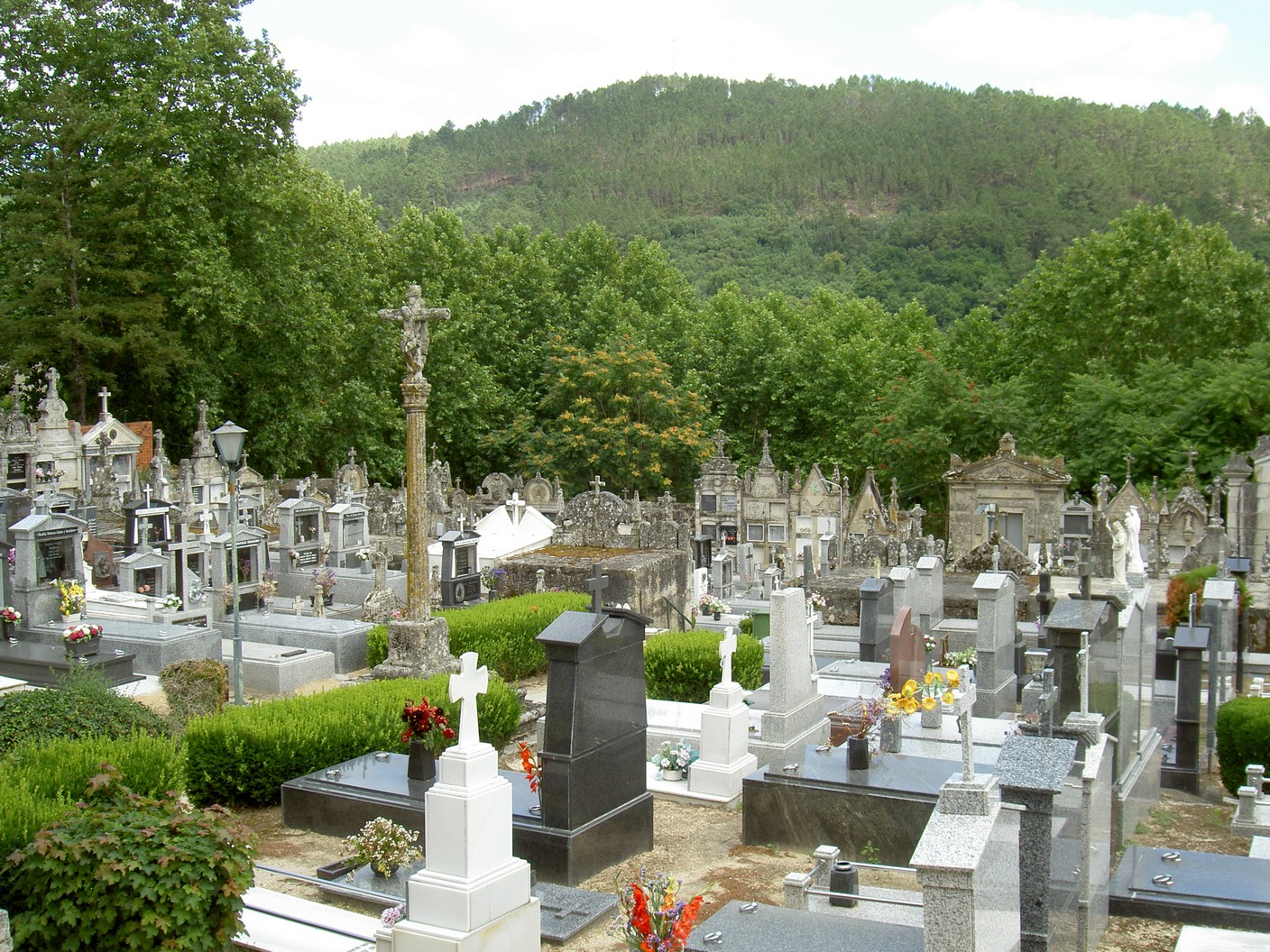