The little kitten I found on a wall recently is growing fast. He has a great life, it seems to me. If he’s not outside climbing trees, he’s inside sitting patiently on the back of the armchair next to the budgie cage. He’s very clever, is our Tom Sawyer with the chubby cheeks, for he pretends to be asleep any time you walk by. Then, when he thinks nobody will notice, he sits up and whacks the budgie cage with his paw. If you turn round to scold him, he quickly crouches down and pretends once again to be asleep. He is simply fascinated by the budgie!

Our budgie, Peter Pan, feels so secure in his cage that he just literally stands his ground and basically ignores the cat. In fact, I think Peter Pan quite likes the cage swinging back and forth each time Tom Sawyer swipes it with his paw. He whistles loudly and talks to the budgie he sees in the little mirror hanging in his cage. Maybe there’s a common understanding between the cat and the bird.

This may sound like domestic bliss here in Urbanización Casalot, Miami Playa. But it isn’t all sugar and spice.

One evening, I’m sitting on the front porch listening to the live music coming from the German night club across the road. The group is playing “The Winner Takes it All” and I try to figure out the nationality of the singers. Could be German?  Could be Swedish? Or Spanish?  Actually, no matter where they come from they’re quite good and I’m sure Abba would be pleased with their performance. The neighbours, two doors down, are dancing in the road. They wave theirs arms high in the sky and snap their fingers as if they’re dancing some Catalan version of Sevillanos or of the Birdie Dance. It’s a delightful evening now that the sun is no longer a blazing cannonball and I marvel at how lucky I am to be in Spain, just three kilometers from the Mediterranean Sea. I sip on my ice cold Brandy Alexander and sigh with contentment.

In the background I discern a high pitched noise. What could it be?  Perhaps a baby crying? The live music is thumping way and people are shrieking with laughter. I wonder if laughter sounds the same in every language? Is there such a thing as German laughter, British laughter, American laughter, etc.?

I try to ignore the sounds from the German night club and focus on the strange wailing noise that seems to be emanating to my left, at the side of the house, next to a bush. When the music stops I immediately realise that it’s not a baby crying, after all. It’s a cat  miaowing at the top of its lungs. It must be Tom Sawyer! Where is he? And why is he so upset?

I get up and walk towards the bushes. There he is. His back is up and when he sees me he starts to hiss. What is wrong with him? Normally, he’s very docile. From the other side of the bush a big fat cat appears, all the while wailing and howling. It too has its back up. He’s intent on invading Tom’s territory and a cat fight is about to erupt!  What to do? Tom is not yet fully grown, and going by the size of the other cat, it could easily devour poor old Tom. Golleee.

Does this work?  Nope. Guess what Tom Sawyer does! He turns round to face me and miaows long and sharp at me.

“Tom. Tom. Come here.”  I bend down to pick him up. He holds his ground and hisses at me, his back is even higher up than before. It’s as if he’s chastising me, as if he’s telling me to leave, for this is his battle and he can handle it. He doesn’t want me to interfere.

Now, I’m good at taking hints. Absolutely. I take a few steps backwards. Guess what Tom does? He marches over to me, all the while miaowing his head off as if telling me to get lost. At the same time the big fat cat is wailing loudly as he approaches Tom who turns around and wails even louder than the fat cat. I so wish I had a bucket of water.

Can you imagine a time when fighting is eradicated?  When threats are just music ringing out in the evening air, when wars and battles silently dissipate midst the bushes and borders. All  that we need is a bucket of water to toss on the cries of both sides. It has to be so simple.

I go back on the front porch and try not to think about Tom Sawyer and his first encounter with a raging fat feline. I know enough about cats to realise that territory is important to them and that it’s instinct to protect it at all costs. I just hope he doesn’t get hurt.

The cat fight begins. Based on the racket and the scuffling it certainly sounds like a major battle. Fortunately, the band starts playing again drowning out the noise a little with their rendition of  Captain and Tennille’s “Do That To Me One More Time”. Something tells me that neither cat would be singing along with these lyrics.

I resist the temptation to get a broom and shoo the fat cat away. If Tom had wanted me to help him he wouldn’t have yelled at me so much.  If he were to win the fight due to my getting involved then what self-respect could he ever have? He obviously feels he can handle the situation, don’t you think?

There’s a silence by the bushes. I’m glad the fight, short and to the point, is over. But now what? I hesitate as I’m too scared to investigate lest Tom be lying on the ground bleeding. Maybe I should have got rid of the fat cat? Maybe Tom is just too wee to be fighting that great big lump of a cat?

“Miaow!”  It’s Tom prancing over to me. “Miaow!”  He sounds pleased with himself, and quite a happy defender of his territory.

“Are you okay? Are you hurt?” I examine him carefully, relieved that he’s talking to me in his usual cheerful way. He does seem perfectly fine. I notice the fat cat zooming down the road, whizzing passed the merry neighbours dancing in the street.

Tom Sawyer with the chubby cheeks walks up and down and round about purring as he brushes against my leg. Then he stares up at me as if to say, “See? I won.” 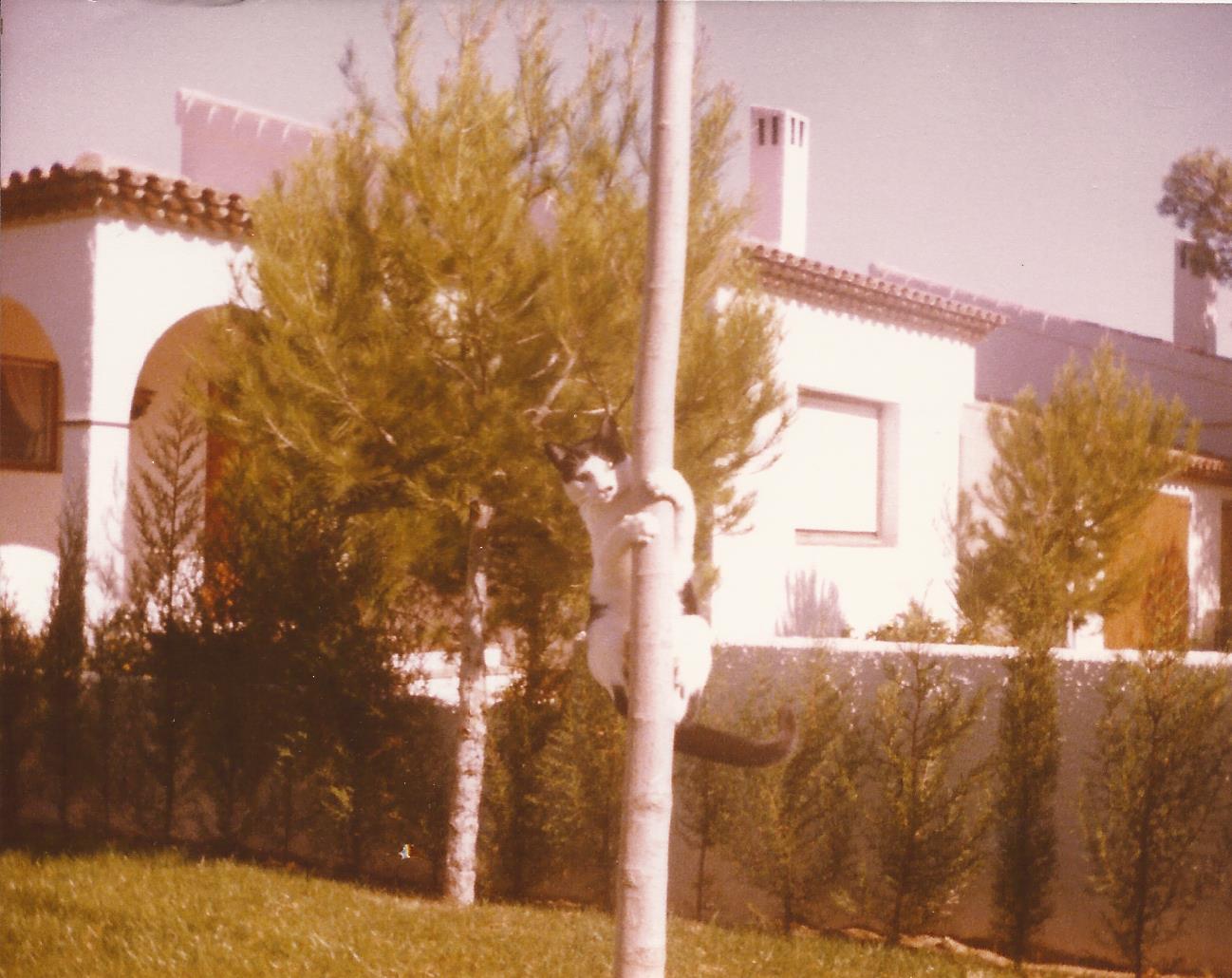