Horse ownership is on the increase.

At least it is in this quiet corner of Spain. To be perfectly honest, horses aren’t really my thing: a nasty bite from a child-eating donkey put paid to that.

As a boy, growing up in the shadow of Yorkshire’s satanic mills, the last thing on my mind were rosettes and dressage. Horsy types drove Range Rovers, spoke like the queen and doted over daddy’s little princess. The closest I came to the world of show jumping was sitting around the telly at Christmas; cheering Harvey Smith over the great wall at Olympia.

That said, there’s something quite compelling about the raw power, grace, and beauty of a herd of horses galloping free across open countryside.

Melanie on the other hand adores them. As a teenager she would happily work all day at her local stable for little more than a few hours riding. For this reason alone, I found myself agreeing to visit this year’s Feira do Carballo de O’ Saviñao (Horse Fiesta). 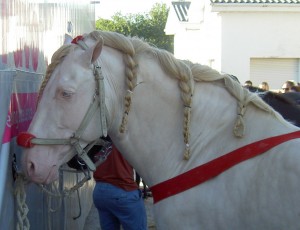 As if to illustrate my earlier claim, this relatively new fiesta began seven years ago in the village of Escairon. From humble beginnings, it now attracts contestants and visitors from all over the area. The fiesta is a two day affair. The main spectator events are held on the final afternoon.

As we drove through the sleepy village of Escairon, the only hint of a village fiesta was a sagging banner hanging limply from two lamp posts on opposite sides of the high street. We parked the car and strolled towards the recreation area. Overhanging fruit trees provided patches of shade as we walked along. Fallen figs, squashed under foot, littered the pavement and ripe plums were hanging tantalisingly out of reach.

The focal point for the first event was the village cattle market. A crowd of several hundred were gathered around a makeshift manége. My earlier preconceptions of watching daddy’s little princess, clad in jodhpurs and polished boots; parading around a field, were quickly dispelled. 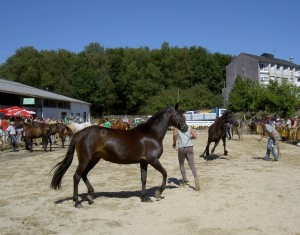 Not a rosette in sight

Within the sandy paddock were half a dozen young men wearing jeans, T-shirts, and their favourite trainers. Two judges looked on as the men walked and then trotted their trusty steeds up and down the paddock. I could tell from Melanie’s facial expressions that most lacked the handling etiquette associated with such events. To the winners went the bragging rights: rosettes were not required. 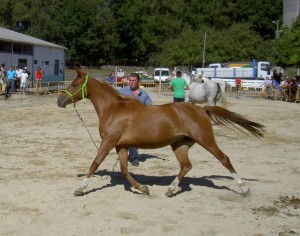 Beauty and the beast

The next event, El Galop, moved across the road to the recreation area.By now, these same young men had saddled their mounts and were ready to do battle. A makeshift race course had been built around the football field using a number of reinforcing rods and a roll of plastic cordon. Health and safety consisted of a few bales of straw placed strategically in front of the goal posts. This didn’t bode well for the security of rider or horse. 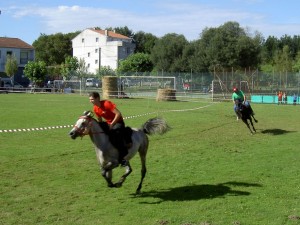 El Galop – Not for the faint hearted

There’s something about speed and the perceived invincibility of youth that brings the worst out in young men. In all, eight riders volunteered to compete in this Ben Hur-style dash around the arena. Out of these, just two thought it manly enough to don protective headgear. The rest of this motley crew looked more like football fans than young men preparing to hurtle around the pitch on uncontrollable steeds. This was horse racing at its most primitive and the audience knew it.

Each race contained three competitors. Twice around the track and the race was won. The event was an accident waiting to happen and we weren’t kept waiting long. On the final bend of the final lap of the third race, the inevitable happened. Two horses, tussling for position, collided. The inside nag lost its footing and both horse and rider tumbled to the ground.

A sharp intake of breath hushed the spectators. The young rider lay trapped; leg caught fast under his mount. Quickly, the horse sprang to its feet releasing the jockey. The young man rose gingerly and hobbled bravely into the centre of the pitch. He sank to the grass clutching his ankle. Without delay, his friend sprinted across the field in search of medical assistance. Moments later he returned, tossed him a carrier bag full of ice and left him to his own devises. Ten minutes later he was back racing: slightly less gung-ho but pride intact. 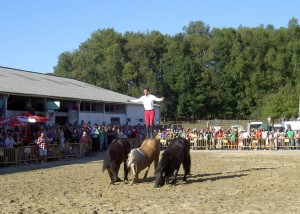 The final event of the fiesta was by far the most professional. Billed as, ‘The Horse Whisperer’ Santi Serra Camps touring show provided a breathtaking display of equine handling. By now the audience had swelled to well over a thousand. It’s difficult to imagine a greater contrast from earlier events to this polished and skilful performance.

We’ve already pencilled this fiesta in for next year. If you’re in the area you’d do well to do the same. 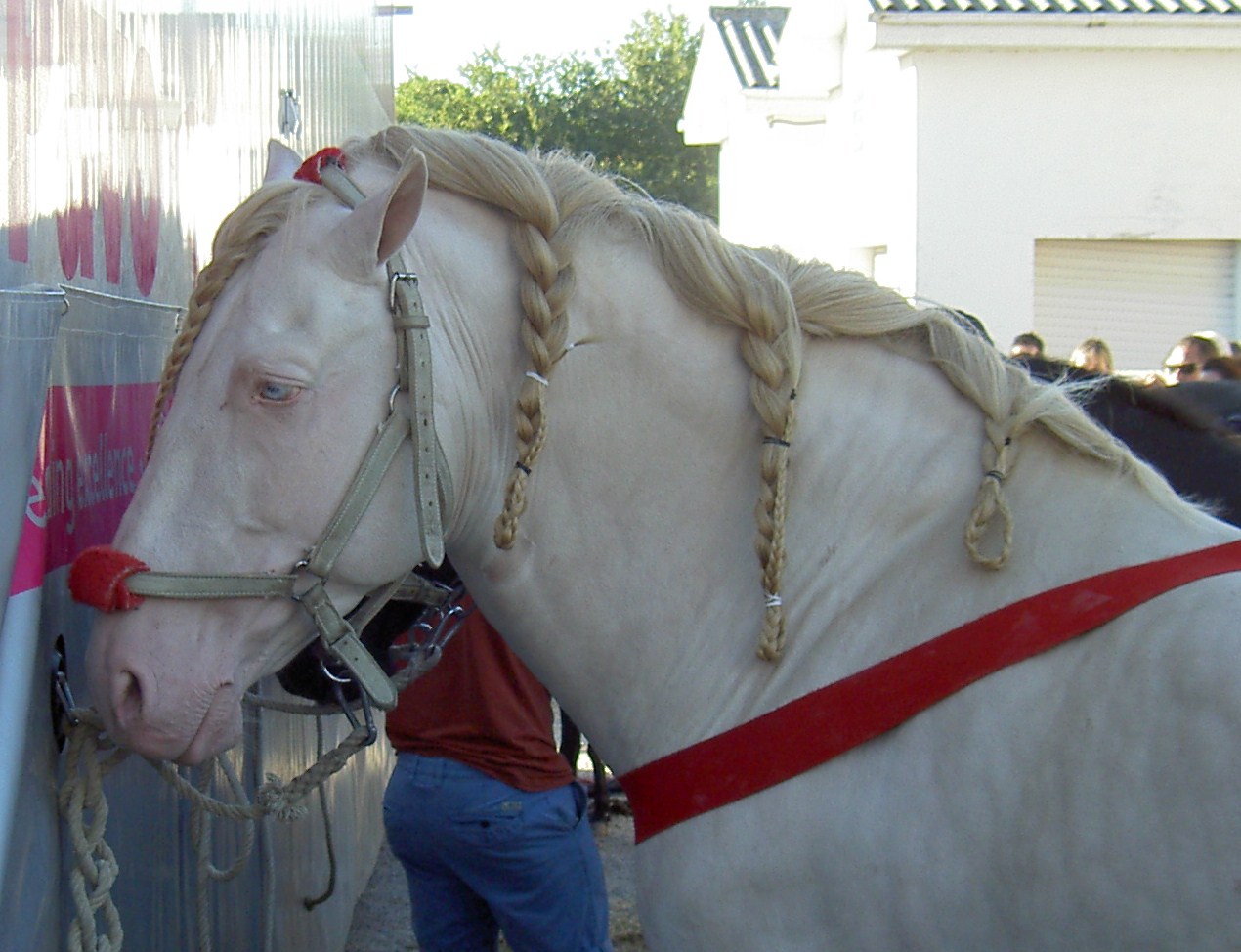 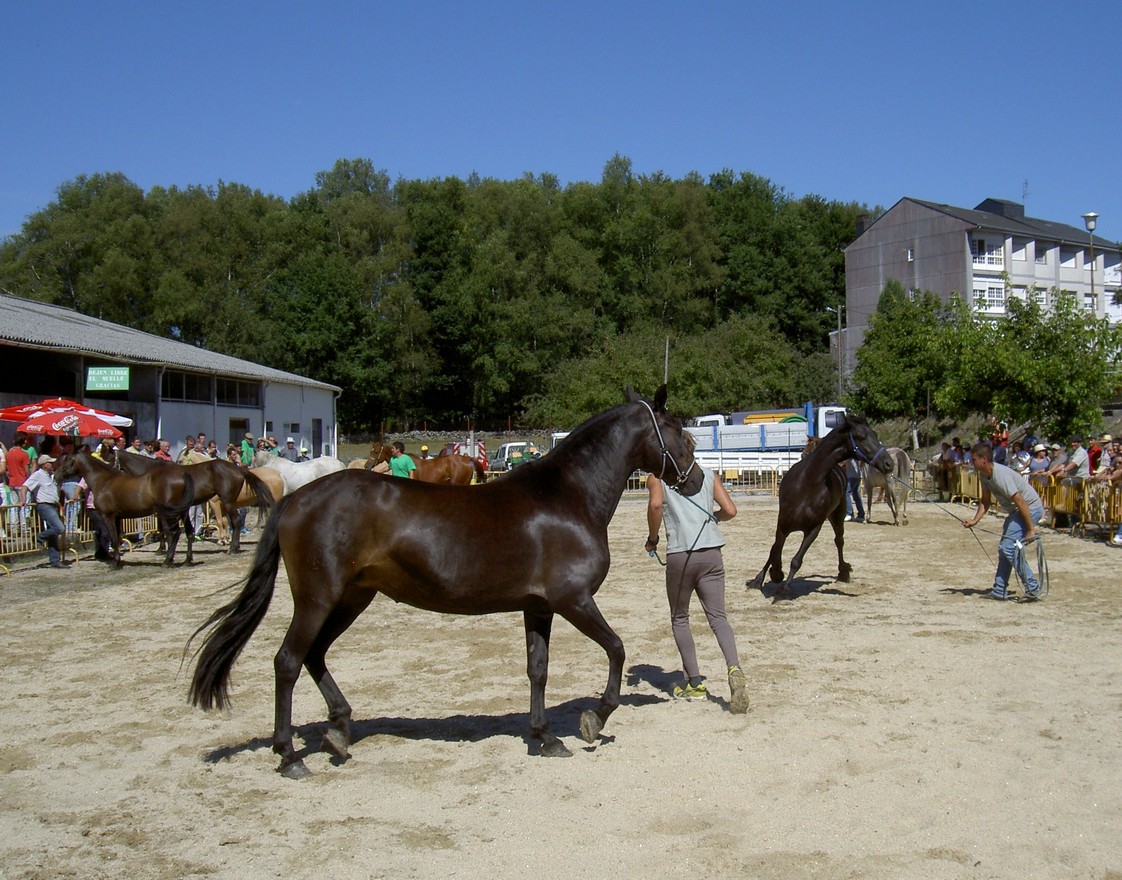 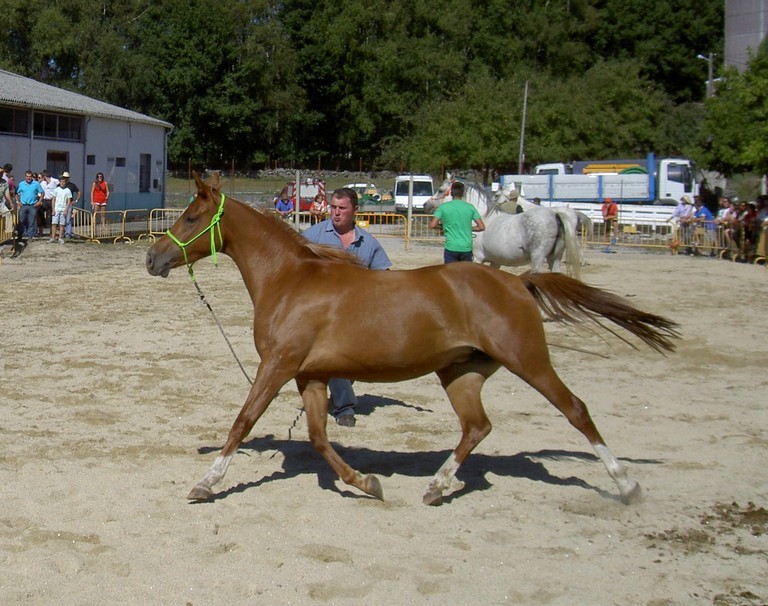 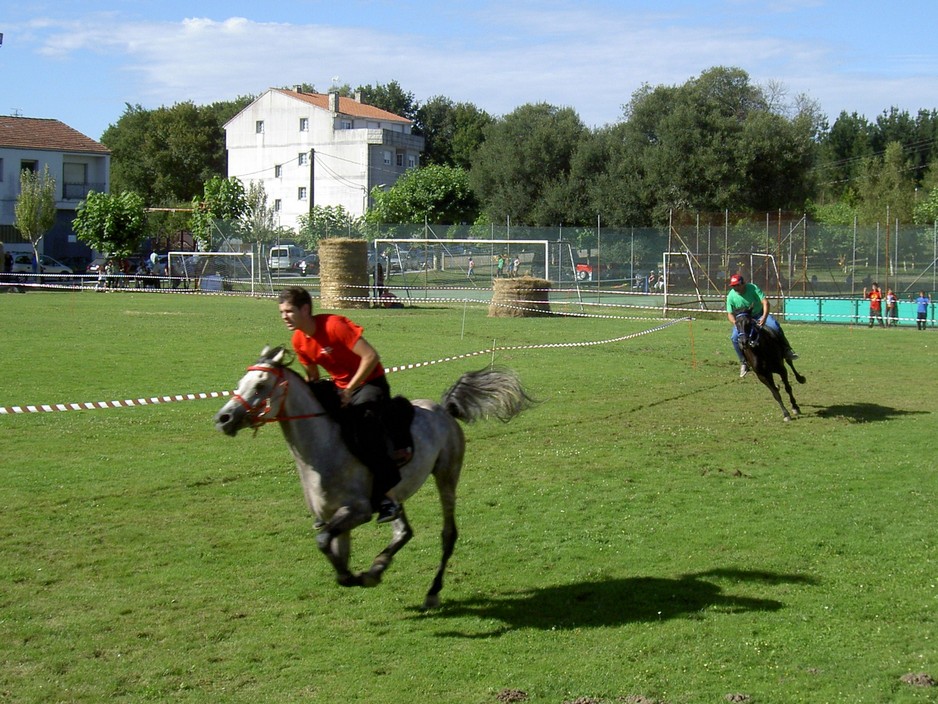 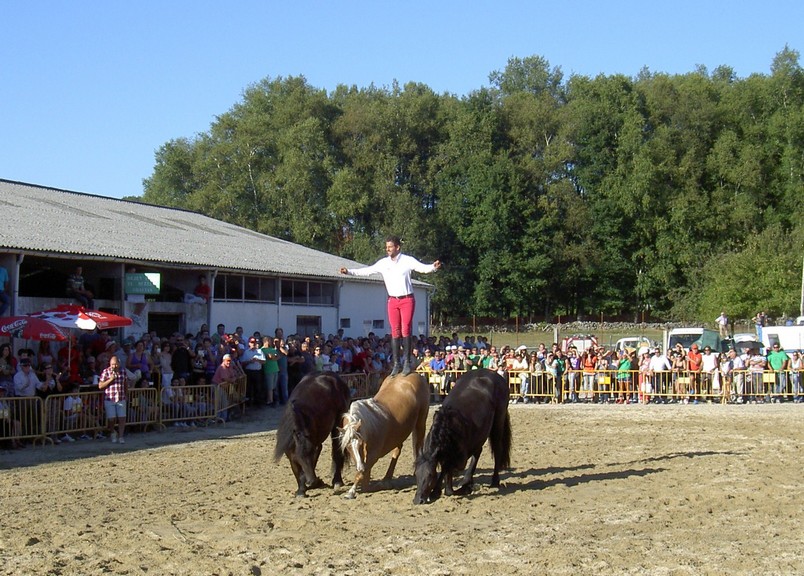