In Search of Paradise

The council of Sober certainly believes so. Their latest tourist guide proudly boasts, ‘O Paraiso Existe’ (Paradise Exists). Its publication coincided with the completion of a series of upgrades to the nine viewing platform along the river Sil. 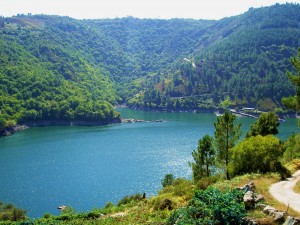 The view from Xabrega viewpoint

If their dower, green leaflet was anything to go by, it seemed unlikely that we would discover a portal to the Promised Land. Undeterred we decided to test the council’s claim and headed out in search of paradise. 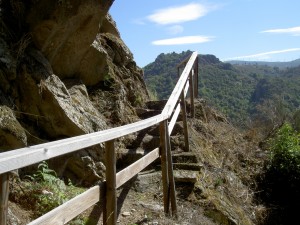 Travelling across the municipality from west to east, our journey began at Xabrega. Here, a narrow staircase of natural stone climbs around the hillside. Oak trees provided shade from the afternoon sun and fallen acorns cracked underfoot as we climbed the steps. As we reached the top the vast panorama opened out. We clambered past a small vineyard and up to a low walled viewpoint. From here we stared out across a small lake, formed by the Santo Estevo dam. On the far shore, pine forests and deciduous woodland blanket the valley.

So far so good: Sober’s claim was living up to its billing. 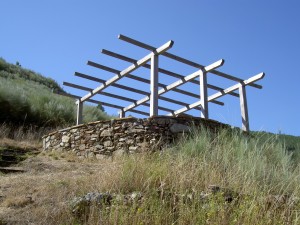 The viewing platform at Os Chancis

Second stop on the tour was Os Chancis. When it comes to this location, we’re a tad biased. After all, this is the site of our favourite summertime bar. The viewpoint is situated on the hillside, just above the bar. A steep pathway leads passed terraced vineyards and up to a wooden pergola. The view from here is breathtaking.

If ever there was a roadmap to paradise, we were surely on it. 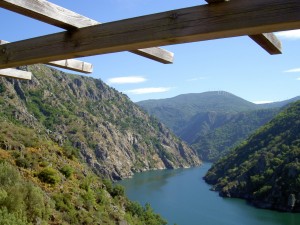 A roadmap to paradise

As the crow flies, or in this case a soaring eagle, the next viewpoint at A Cividade is just over 2 kilometres upstream. By car it’s 18: the last 3 of which are along an unmade track. This modern viewing platform was designed by the architect Isabel Aguirre in 2012. The structure overhangs the canyon like a giant diving board giving visitors spectacular views both upstream and down. 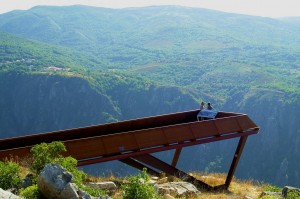 Going out on a limb

A short drive from here is the platform at O Boqueiriño. On the opposite side of the canyon is the abandoned Monastery of Santa Cristina, its conical spire and red tiled roof appear to be floating in a sea of ancient woodland. 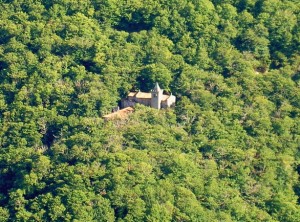 The monastery of Santa Cristina

Santiorxo marked the halfway point of our tour. Back in July, this viewpoint was the venue for a moonlit concert. The hypnotic melody of a solo cellist echoing across the canyon provided a moment of pure magic. Today we were alone, almost 2000 feet above sea level, staring out across an endless landscape. 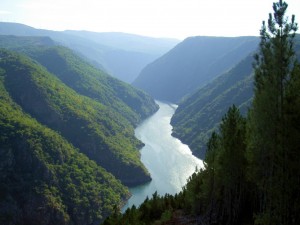 The hills are alive

By the time we reached viewpoint number six at Cadeiras, we were ready for a drink. An ice-cold beer on a warm summer’s day really hit the spot. It almost felt as though we’d reached paradise but there were still three more to go. 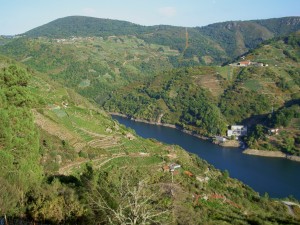 Os Chelos in the heart of the Zona de Amandi

We headed towards the village of Amandi. From here the road winds its way down the valley through row after row of lush-green vines, laden with inky-red grapes. About halfway down is the Os Chelos viewpoint. The valley here is far less severe than downstream; as such, this is one of the few places where vines grow on both sides of the river. 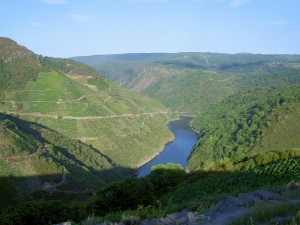 The shadows are lengthening

From here we were able to take the Aba Sacra route along the valley. It’s a single lane road that offers travellers magnificent views of the river as it hugs the contours of the valley, twisting and turning as it cuts a path through the vineyards. 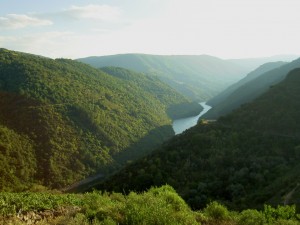 Looking west from the Soutochao viewpoint

Our penultimate stop was Soutochao: a large outcrop surrounded with terraced vineyards rising from the river. A dusty track runs along the top of the ridge, ending at the viewpoint. By now, the afternoon sun was casting long shadows on both sides of the valley with only the most prized vineyards still bathed in bright light. 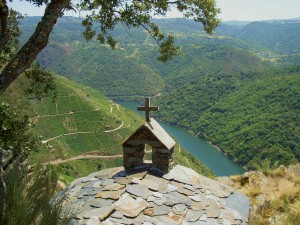 Saving the best until last – Pena do Castelo

Travelling from west to east, we’d saved the most outstanding viewpoint until last. All those who visit Pena do Castelo will surely know that paradise does exist: right here, right now. 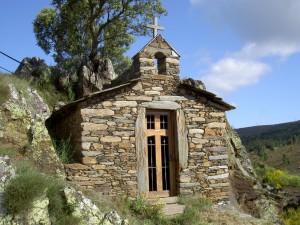 The area of Galicia known as the Ribeira Sacra is blessed with breathtaking beauty at every turn but if you’re searching for paradise, the municipality of Sober will definitely lead you there. 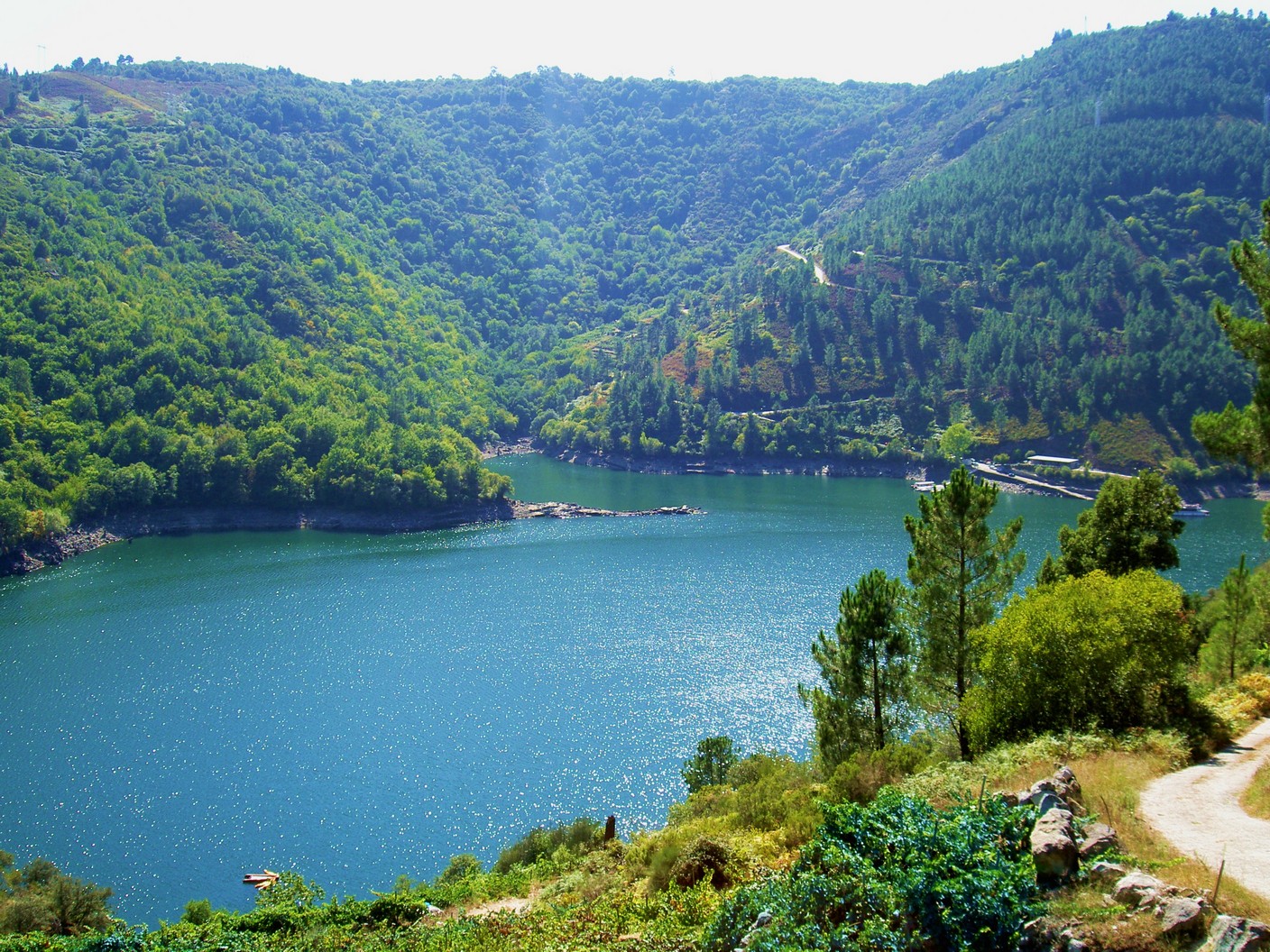 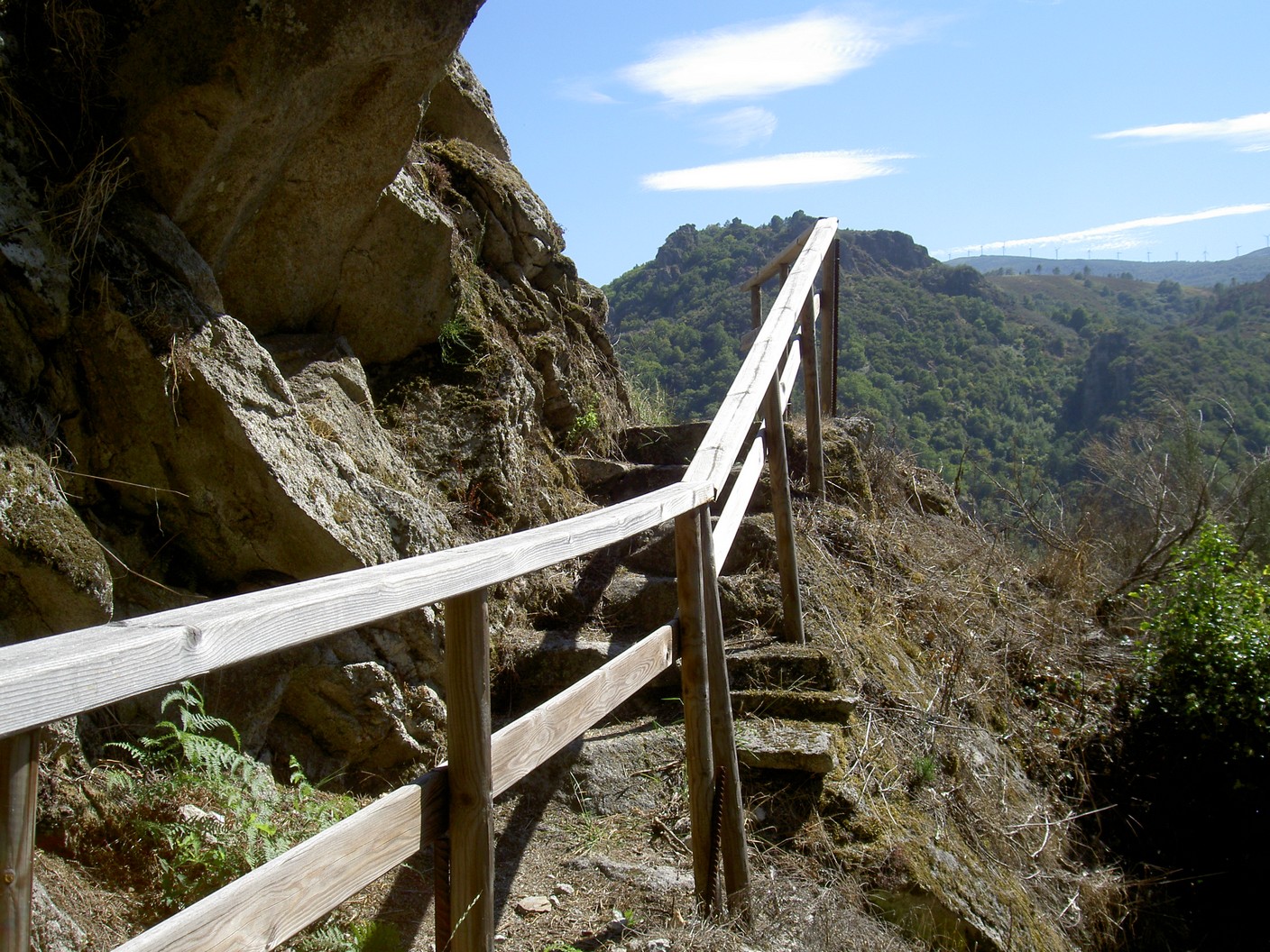 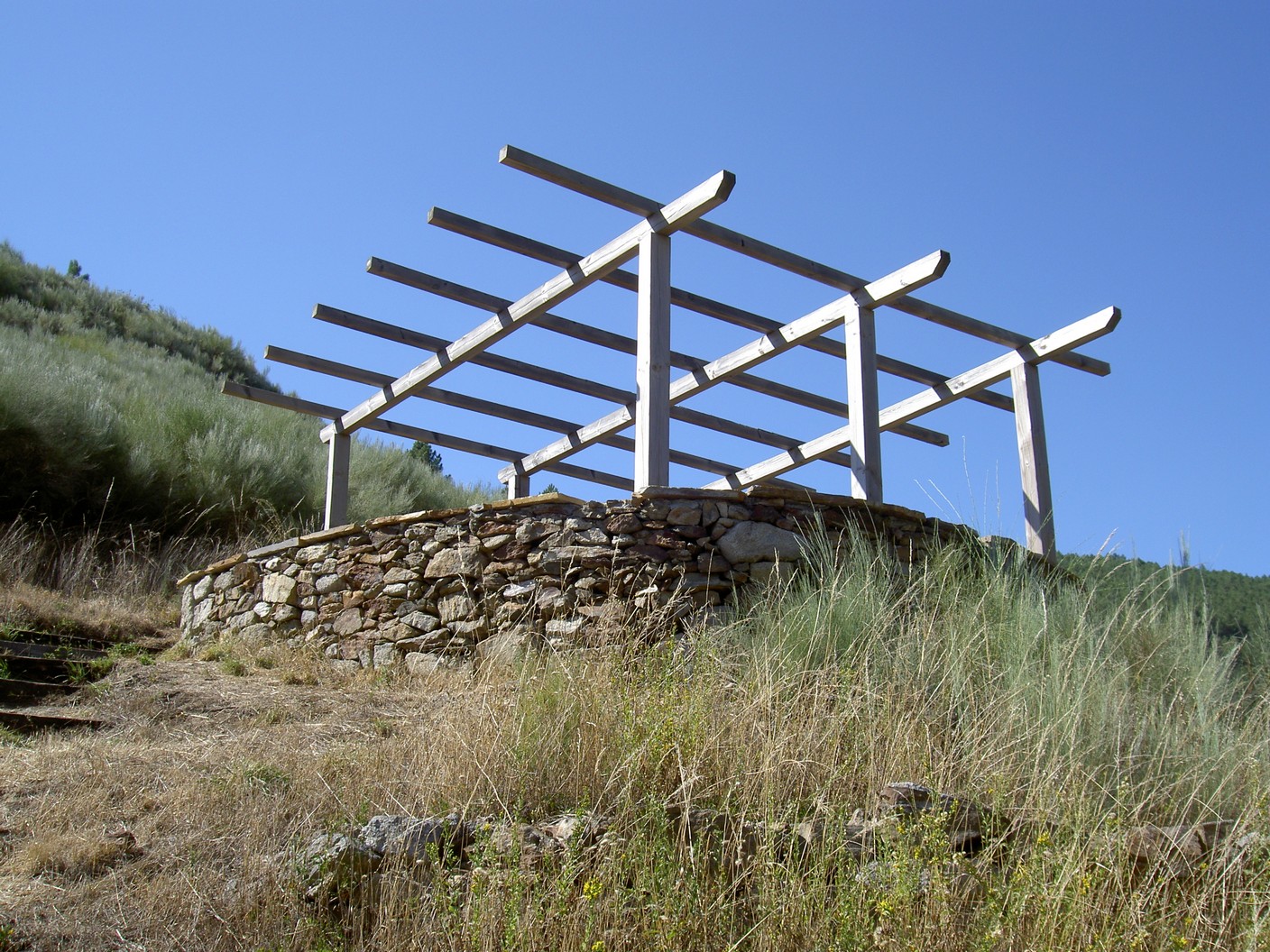 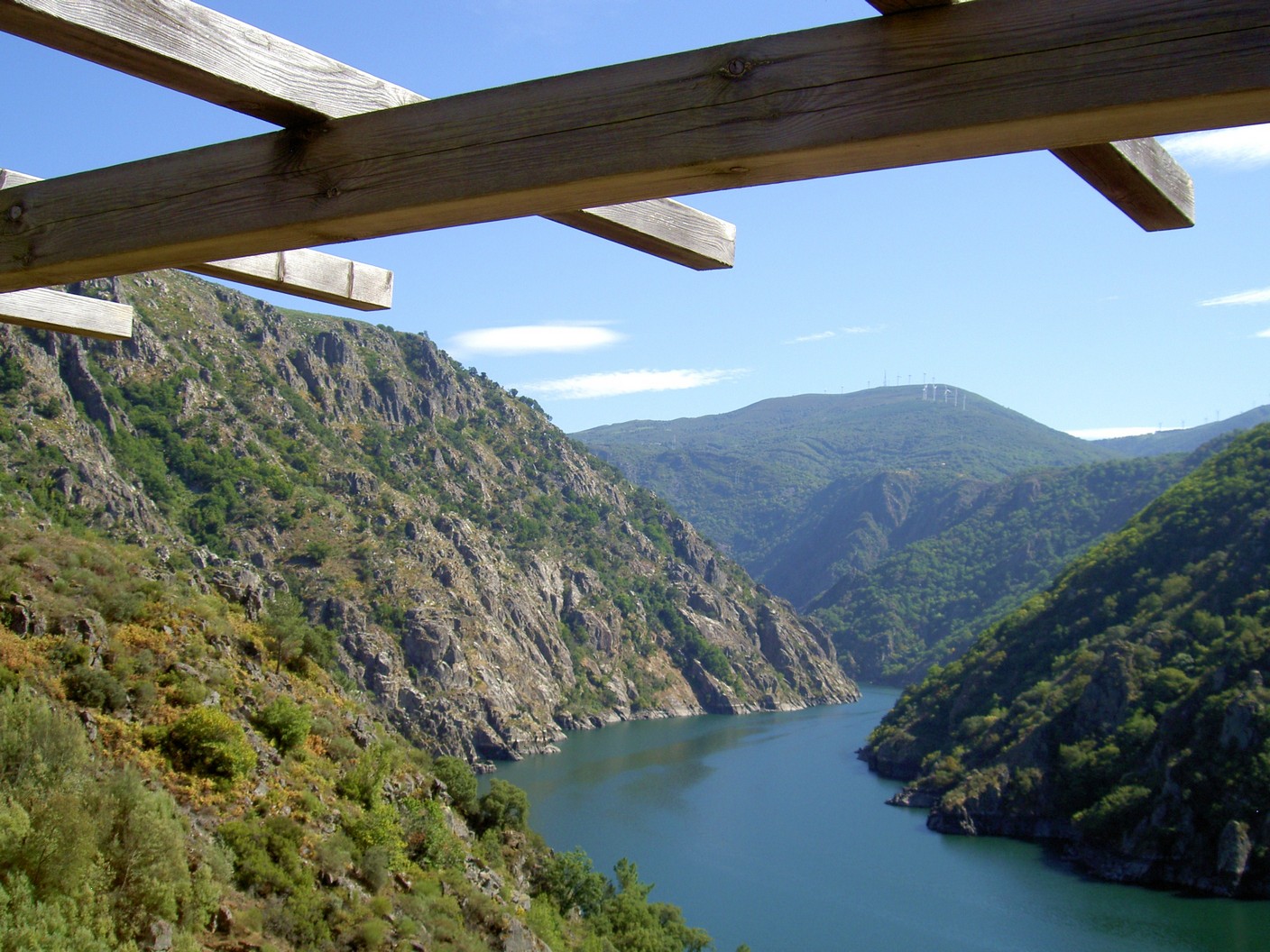 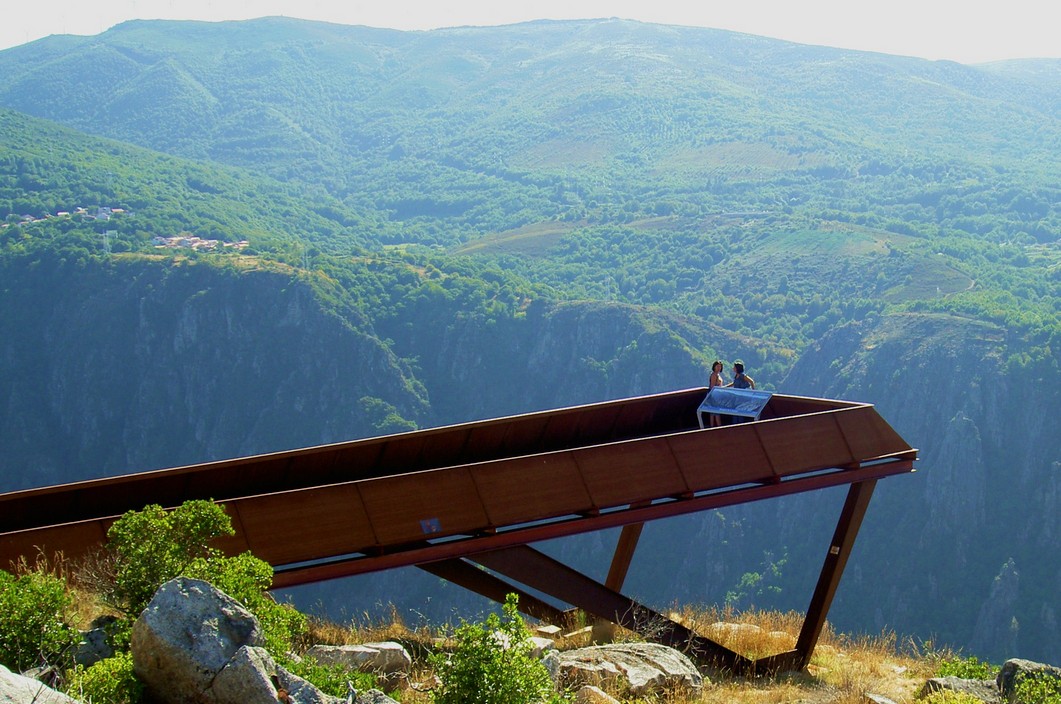 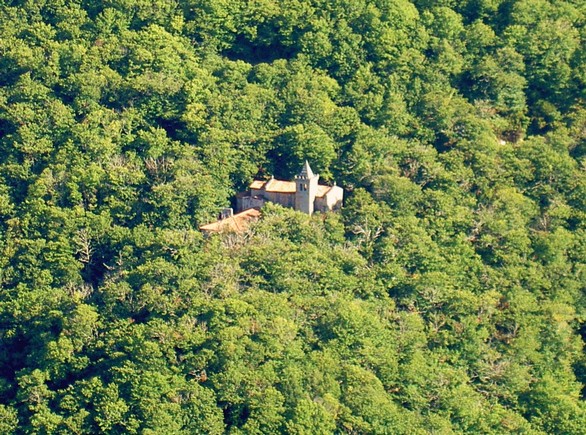 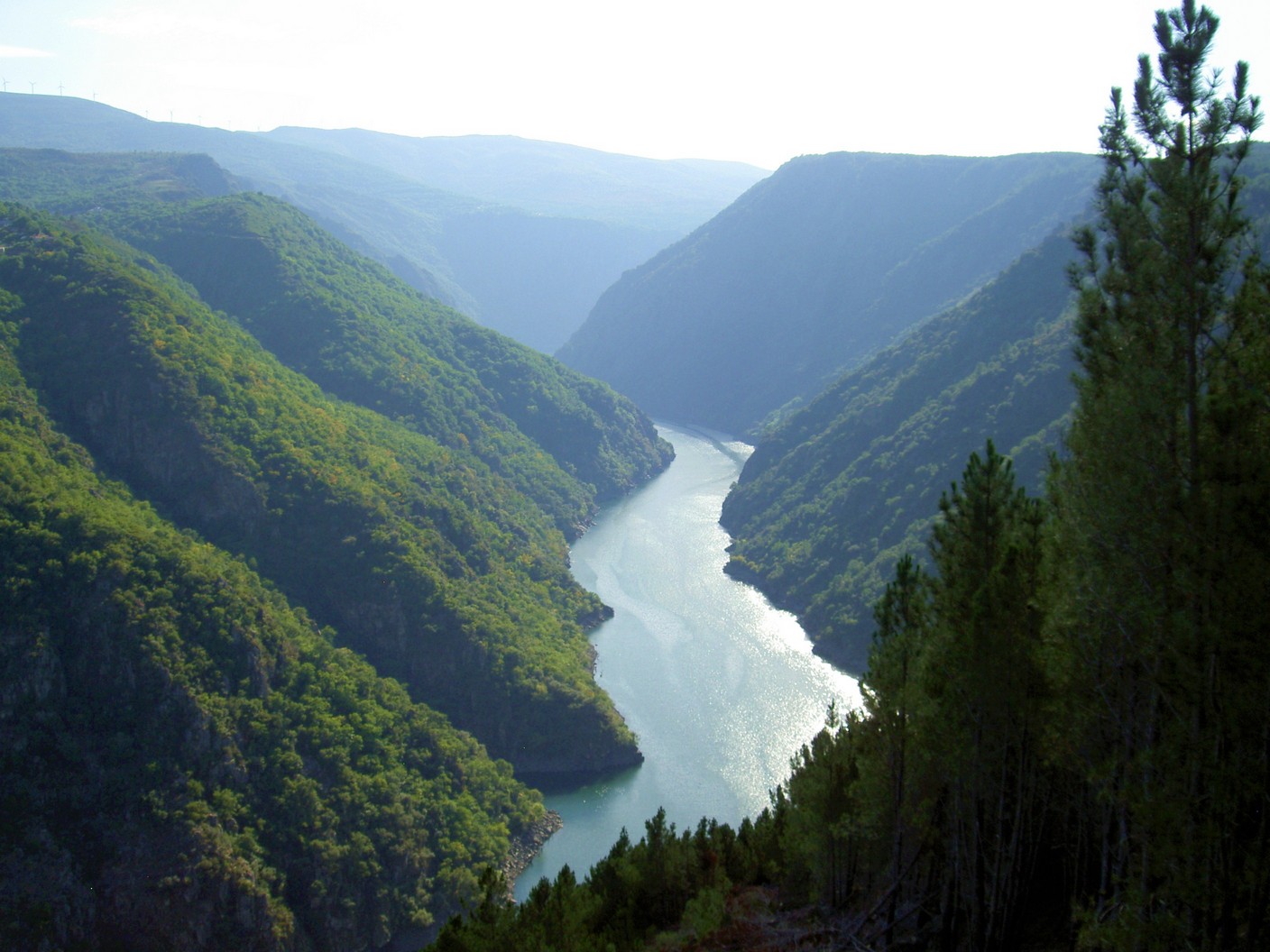 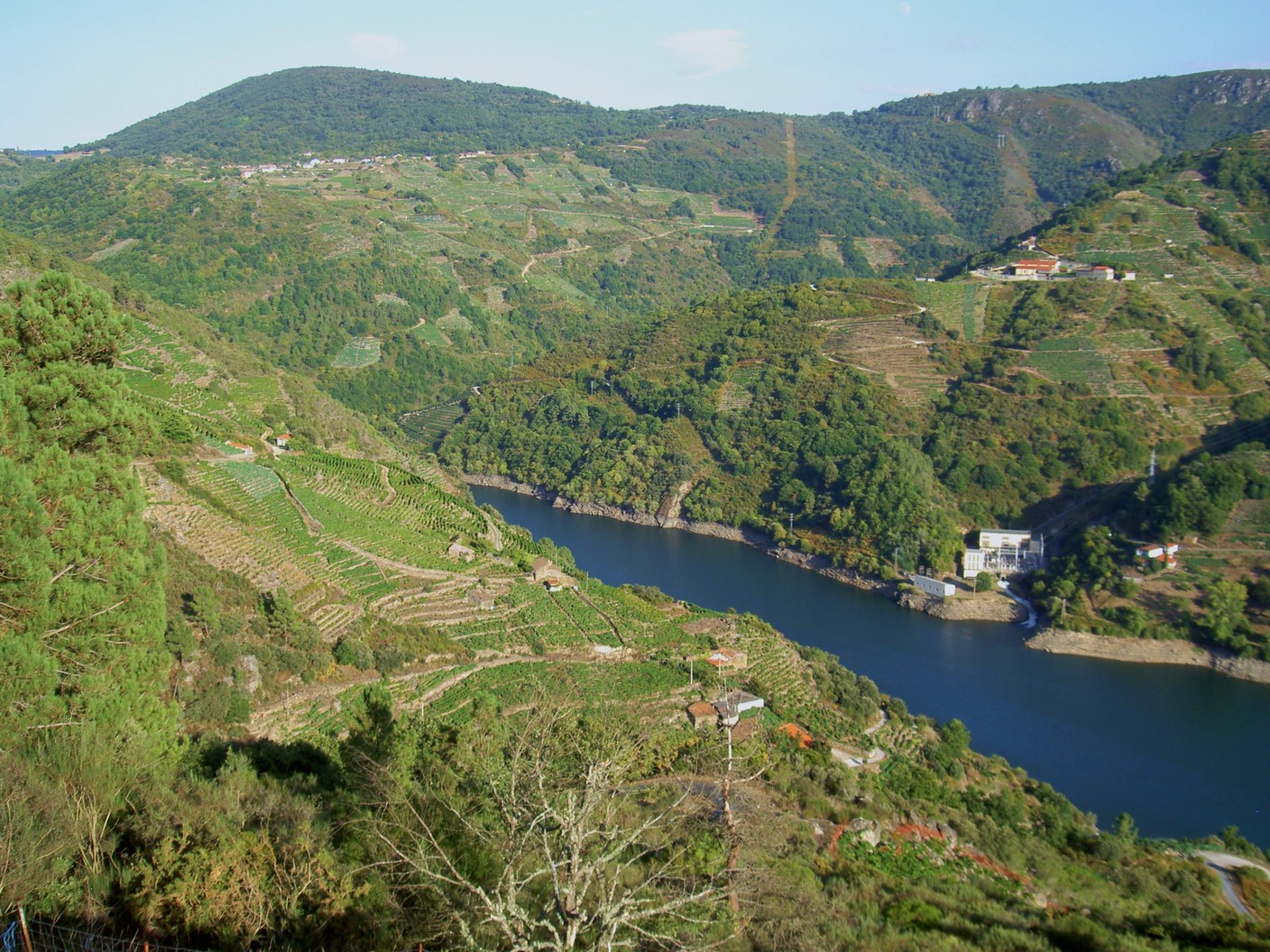 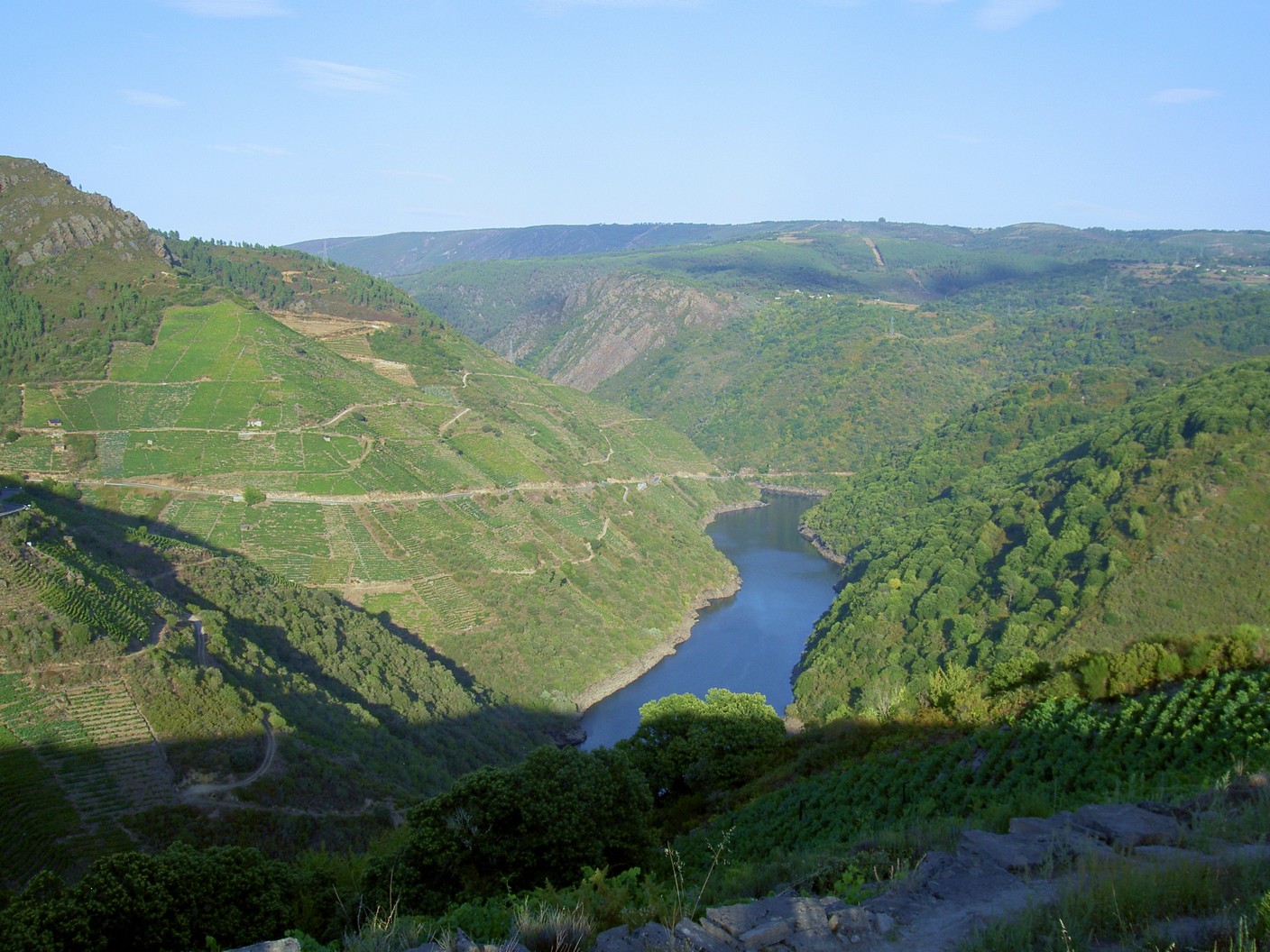 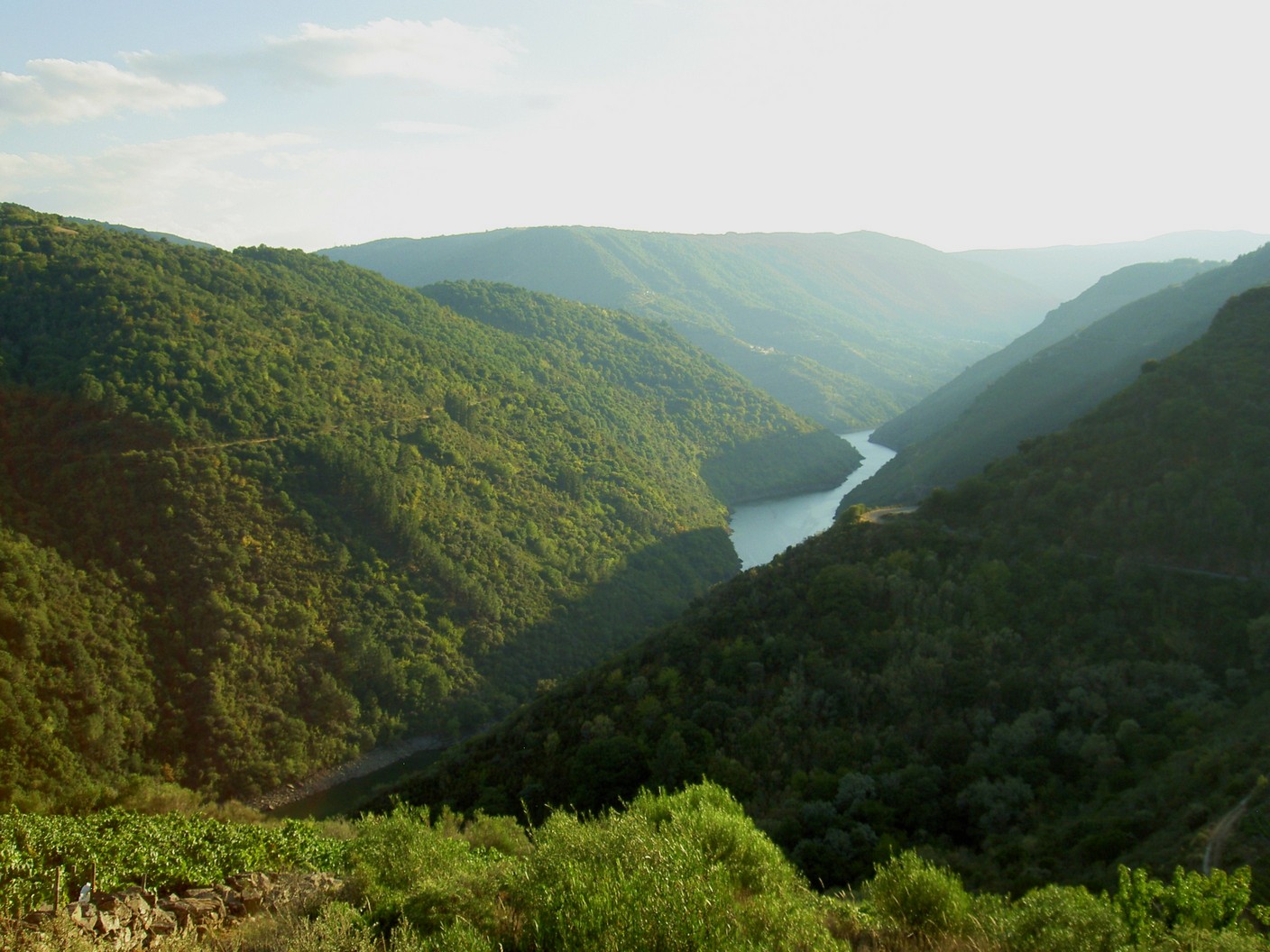 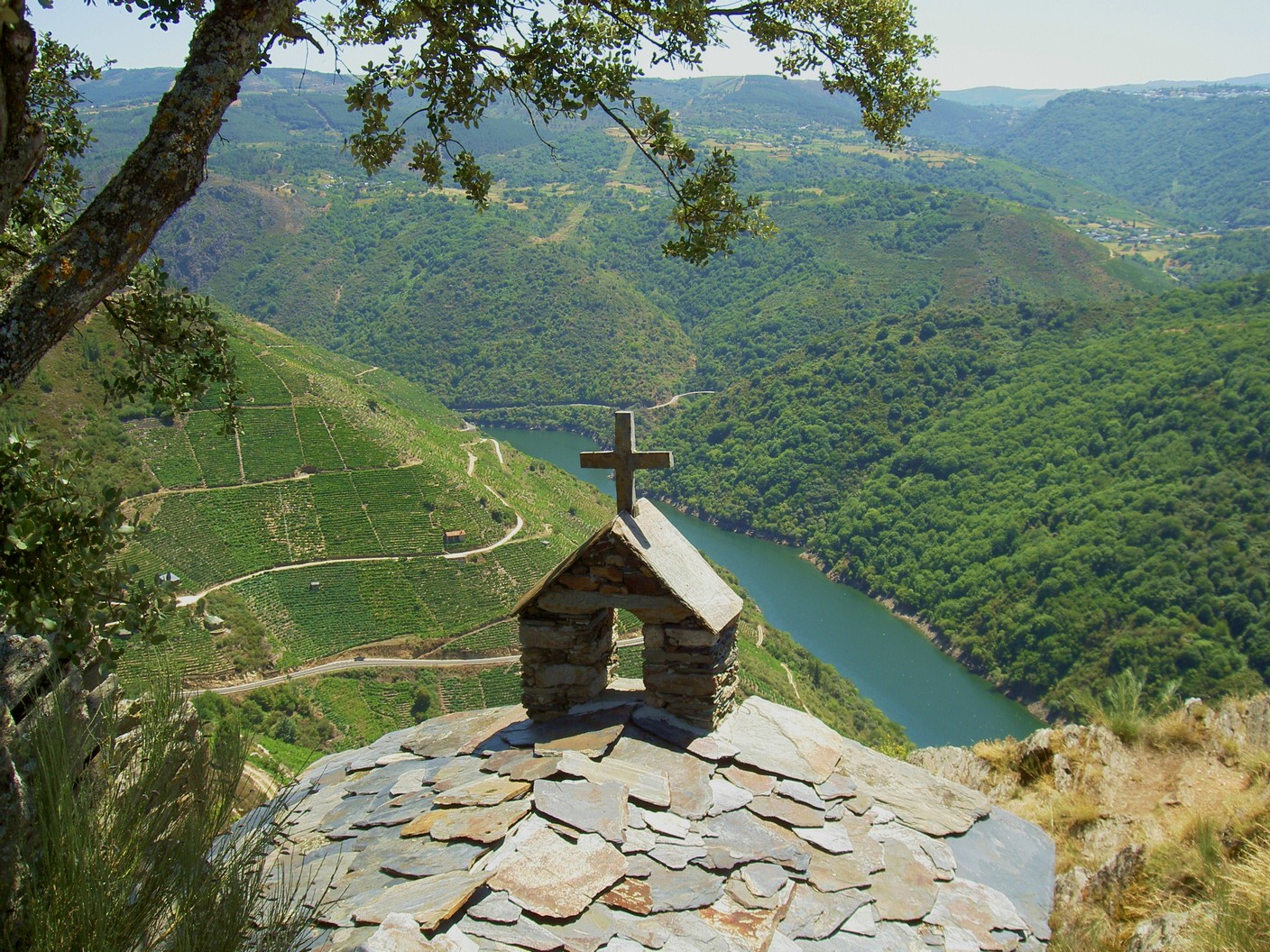 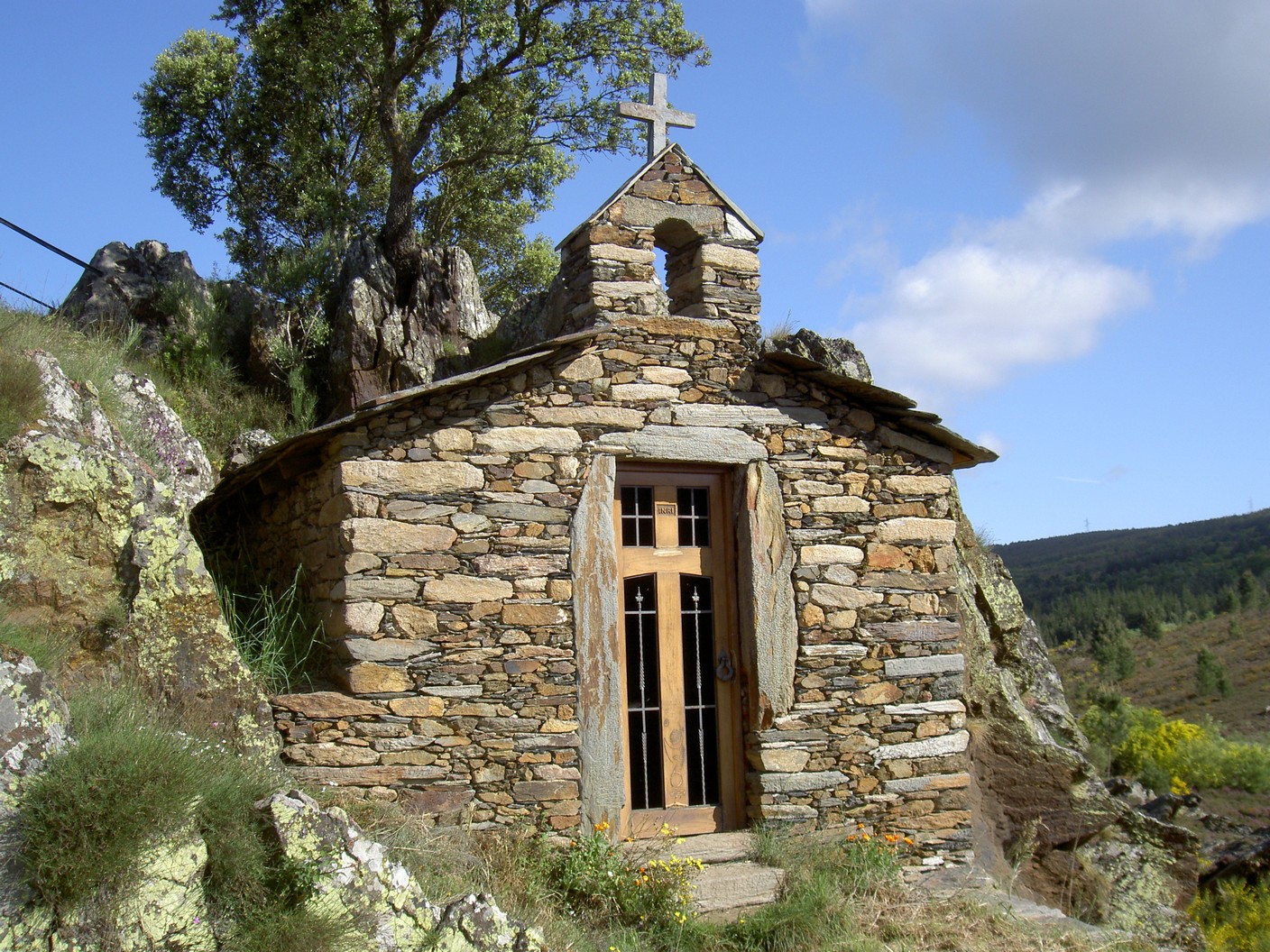