Castro Caldelas – A town with a view

Many borders are simply lines drawn on a map, but not in Galicia. The canyon of the river Sil, dividing the provinces of Lugo and Ourense, must surely be one of the most spectacular borders in the whole of Spain. Watching over this impressive geological fault line is the town of Castro Caldelas; its medieval castle dominating the surrounding area.

There’s something quite appealing about scaling ancient ramparts and re-enacting medieval battles, albeit in ones imagination. When the opportunity arose, we jumped at the chance.

The drive from Monforte de Lemos to Castro Caldelas is one of the most spectacular in the area. The route took us south along the LU-903 to the village of Doade. Staring out across the valley, the town of Castro Caldelas is clearly visible on the other side of the canyon. From Doade the road drops steeply down the side of the gorge, twisting and turning as is carves a route through terraced vineyards. 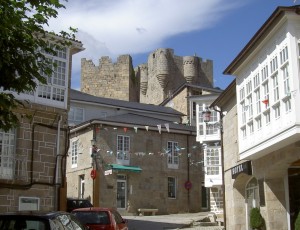 The medieval castle dominating the town

Once across the river the scenery changes: ancient woodland clings to the side of the valley. Vineyards are rare; restricted to a few south-facing patches of land. As the road climbs we passed through the picturesque villages of A Abeleda and O Pomar. The final few kilometres are by far the steepest. After about half an hour we entered the town.

On our left was the Santuario de los Remedios, a 19th century church featuring impressive twin towers. Opposite this is the Praza do Prado. We parked in the square and made our way through the narrow, paved streets towards the castle. 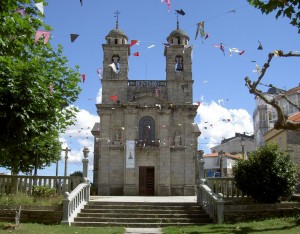 Legend has it that the ruler of this ancient fortress or castro lost a battle to the Lord of Lima. In order to save himself and his family, the defeated ruler offered the Lord one of his three daughters to which he replied ¿cal delas? (what of them); from that day forth the place has been known as Castro Caldelas.

Legends aside, this mountainous area has been inhabited for over 4500 years: a fact supported by the discovery of megalithic burial chambers.

During the Roman occupation, between 137 BC and 19 BC the town became an important stopover on the Via Nova (The Roman road from Braga in Portugal to Astorga in Castile & Leon). 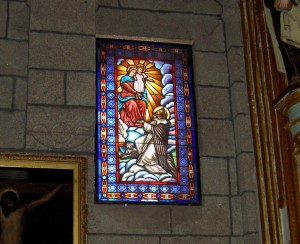 Within the Santuario de los Remedios

The centre piece of the town is a medieval castle, constructed by Pedro Fernández de Castro between 1336 and 1343. Its strategic importance is clearly illustrated by the number of previous owners. Over the entrance are no fewer than four different coats of arms; the Osorio (two wolves), the Castro (six circular forms), the Kingdom of León (a rampant lion) and the Kingdom of Castile (a castle). Even the Greek letter tau, symbol of the Order of the Knights Templar, is inscribed on the clock tower. 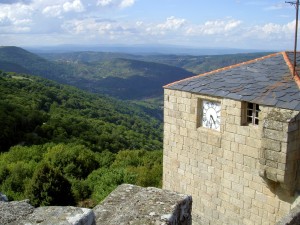 The clock tower and beyond

The views from the castle walls are stunning: mile after mile of rolling hills, deep valleys, and distant mountains fading into an endless sky. From the clock tower on one side to the keep on the other, every aspect affords outstanding views over the Ribeira Sacra and the Sierra de Mazaira mountains. 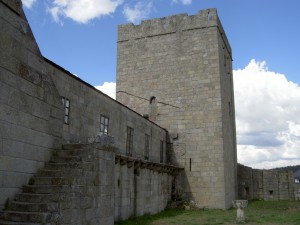 The torre or keep

The torre or keep, houses the oldest written document in Galicia. Dated 1228 and signed by Alfonso IX, it granted certain privileges to residents of the town. Its discovery was extremely significant. All other documents relating to the town were destroyed in 1809 when Napoleonic troops set fire to the castle in retaliation for a local uprising.

The roof of the torre is probably the best place to appreciate the Iglesia de Santa Isabel (Church of St. Elizabeth). Dating from the 16t century, it’s the oldest church in the town and stands at the edge of an outcrop overlooking the Sil canyon. 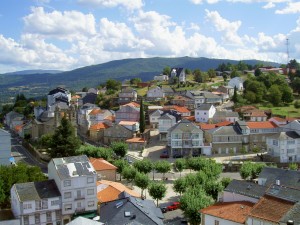 View over the town to the Sierra de Mazaira

Today, Castro Caldelas is a quiet, friendly town with breathtaking views over the surrounding countryside; but its long and turbulent history makes it a fascinating place to explore. 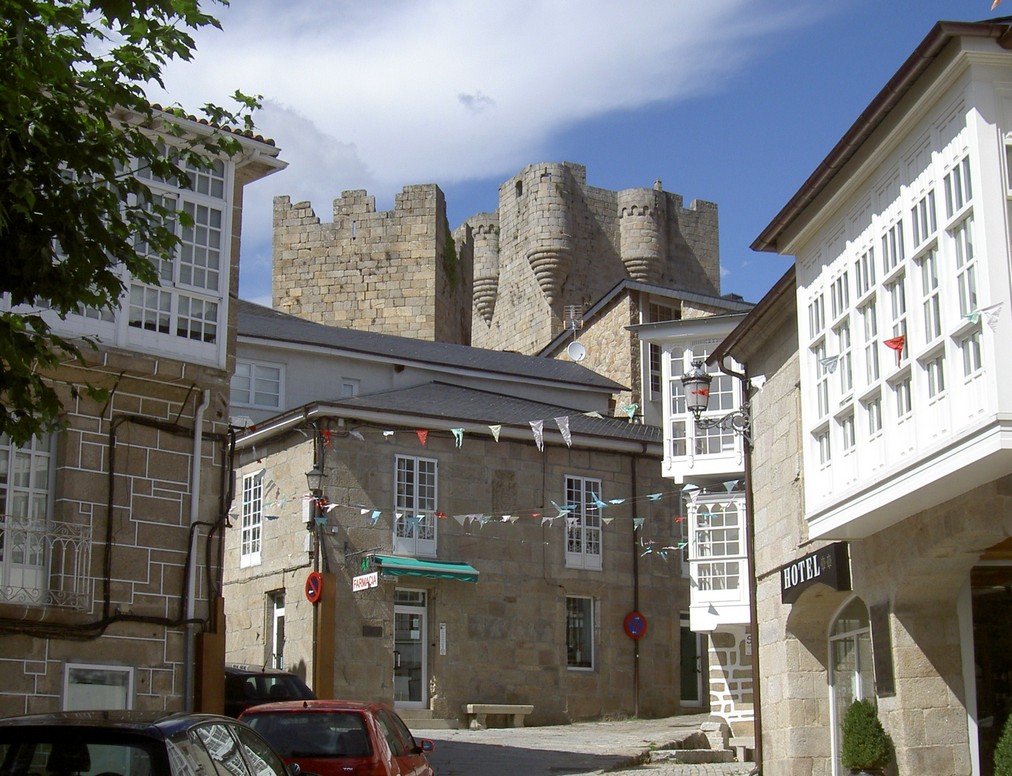 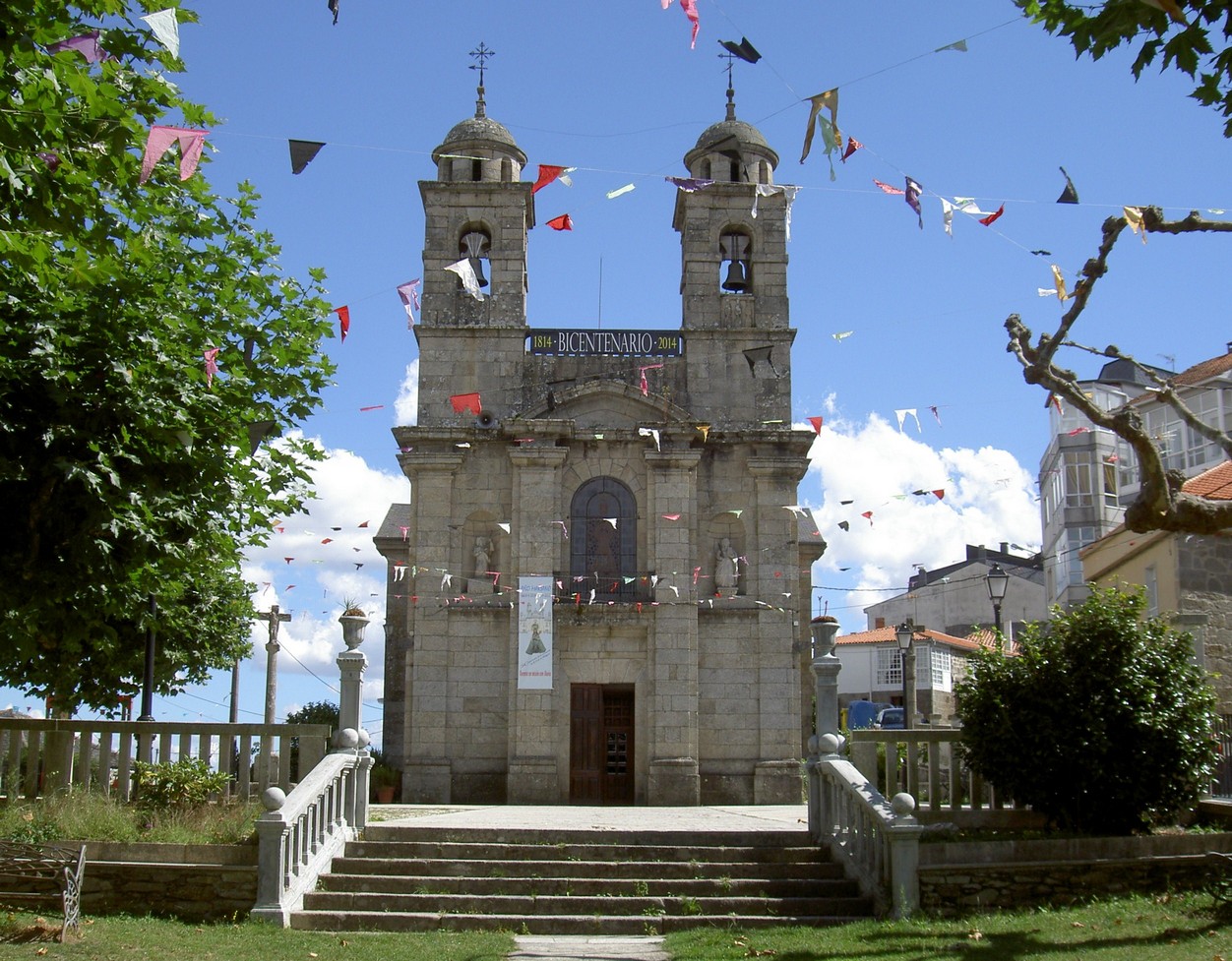 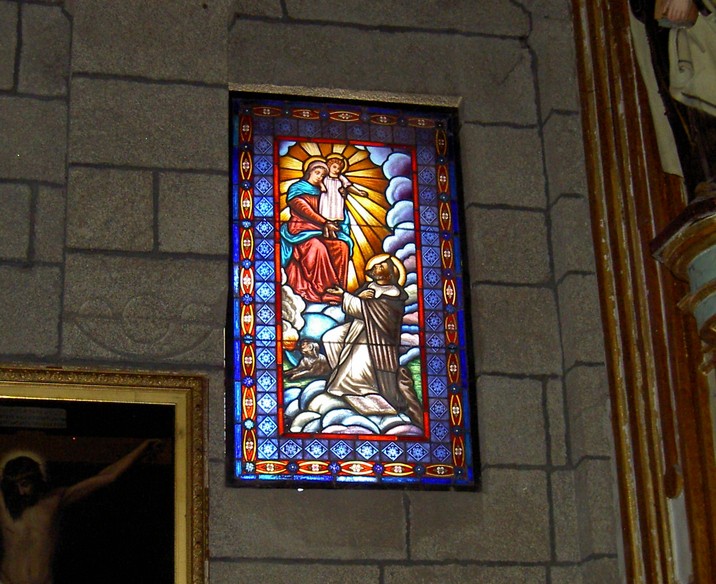 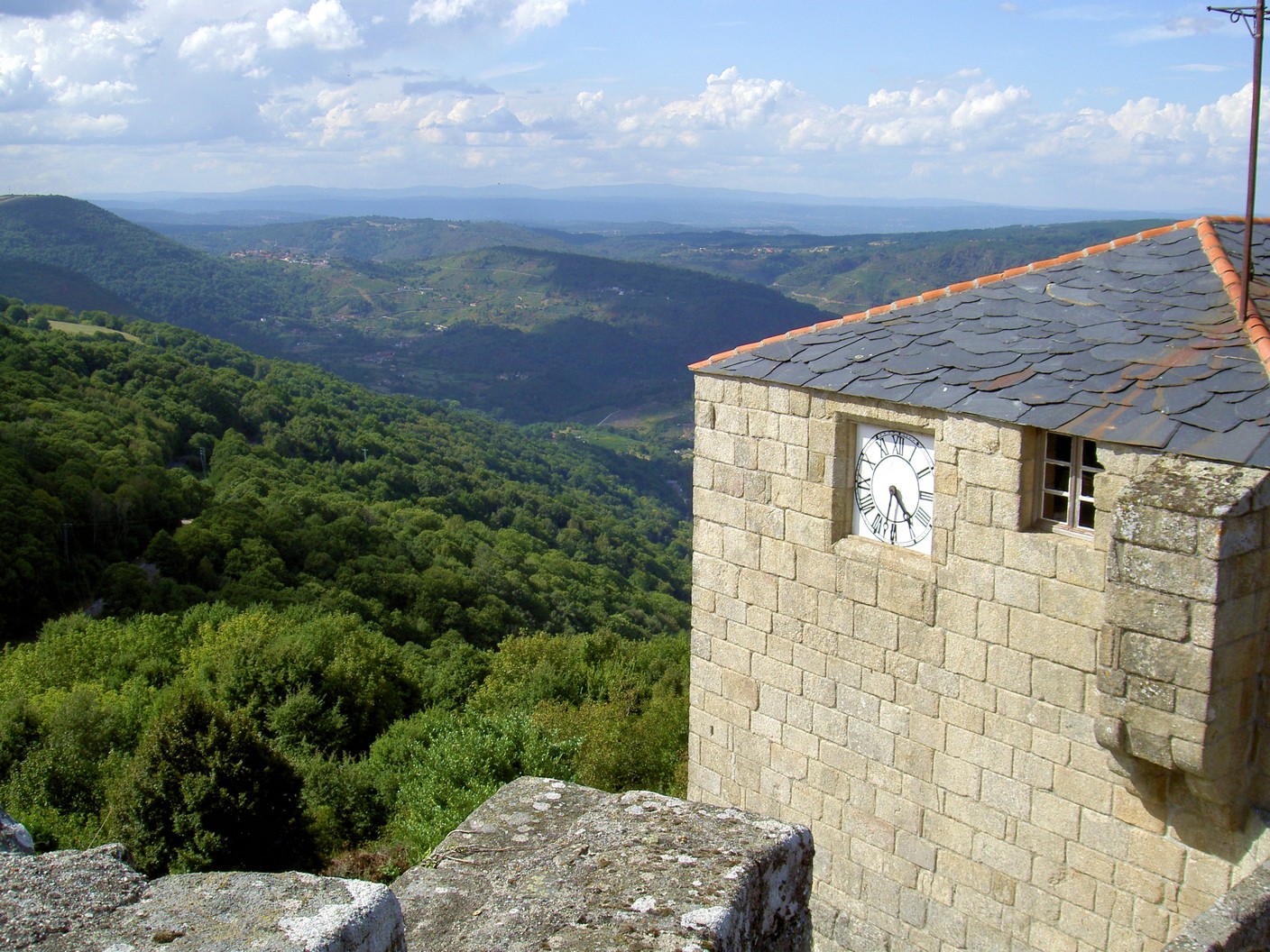 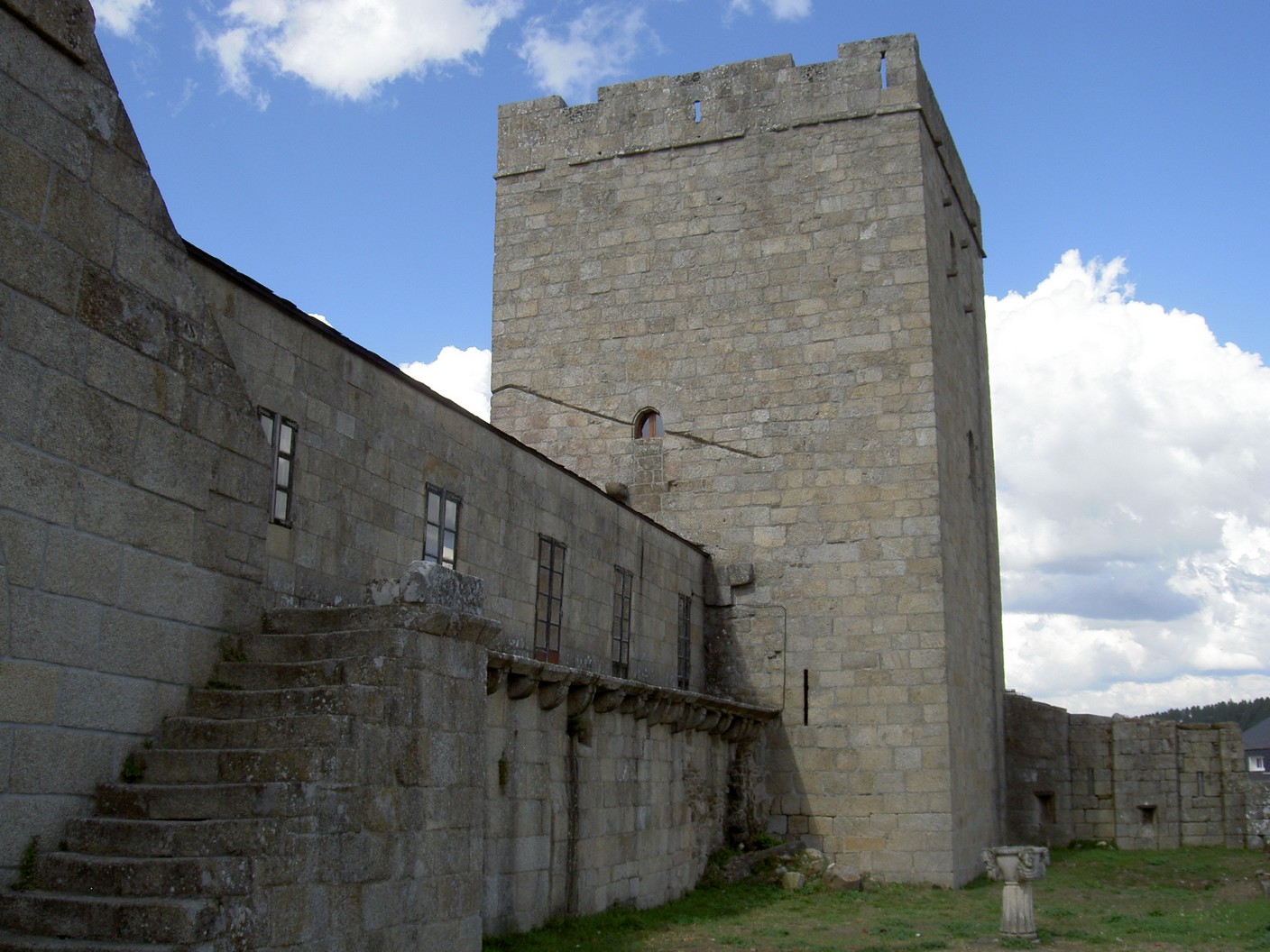 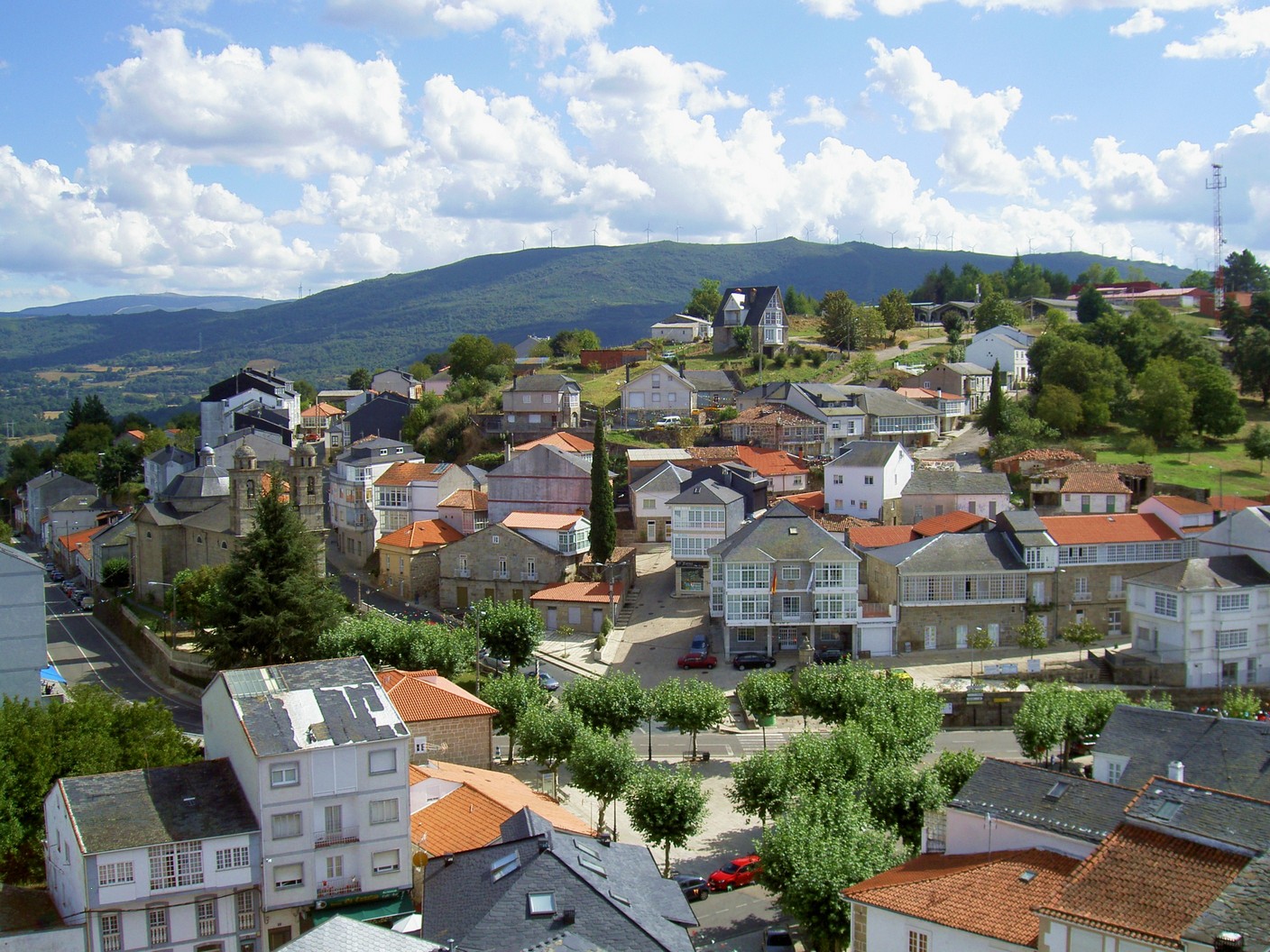